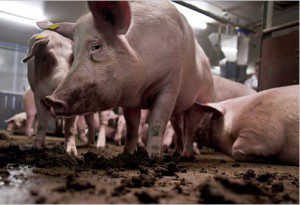 Porcine epidemic diarrhea arrived in the United States in the spring of 2013. The disease, caused by a coronavirus, was first identified in the United Kingdom in 1971, and has subsequently spread throughout Europe and Asia. The disease is a concern for the swine industry because it is associated with high case fatality ratios in suckling pigs.

Porcine epidemic diarrhea virus is a member of the coronavirus family, which also includes the SARS and MERS coronaviruses (CoV). Before 2013 the virus had not been isolated in North America. It was detected on aÂ farm in Iowa in MayÂ and subsequentlyÂ spread to 22 states. It is estimated that between 1-4 million pigs have died of the disease in the US.Â  Recently the virus was found on a Canadian pig farm in Middlesex County, where it most likely arrived from the US.

PEDV can infect pigs of all ages, but is most serious in nursing pigs in which the clinical symptoms are the most severe. The disease is characterized by acute vomiting and watery diarrhea which in nursing pigs leads to dehydration and frequently death. There is no treatment for the disease other than rehydration; no antiviral drugs are available, but a vaccine was developed in 2013. The virus does not infect humans.

Sequence analysisÂ of genomes from three US isolates of PEDV indicate that they are most closely related to a virus isolated in 2012 in Anhui, China. These data suggest, but do not prove, that the US PEDV originated from China. How the virus might have arrived from that country is a matter of speculation. The virus is believed to move from farm to farm on trucks that are used to carry pigs, as well as on contaminated boots and clothing. Many farms observe strict biosecurity procedures in which trucks are properly washed, disinfected, and heated to inactivate the virus. However these procedures cost money and take time, and may be bypassed in some cases. If older pigs are asymptomatically infected, they might be transported to other farms and spread the virus. Once in a farm, stopping spread of the virus is difficult: it is spread by fecal-oral contamination.

National Hog Farmer is not usually on my reading list, but it has a good summary of porcine epidemic diarrhea.