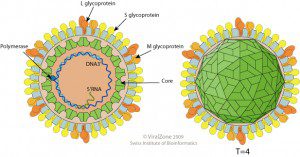 Hepatitis B virus (HBV, illustrated) is a substantial human pathogen. WHO estimates that there are now 240,000,000 individuals chronically infected with HBV worldwide, of which 25% will die from chronic liver disease or hepatocellular carcinoma. The hepatitis B virus vaccine is highly effective at preventing infection. Because there are no known animal reservoirs of the virus, it is believed that HBV could be globally eradicated. The recent finding of HBV in bats raises the possibility of zoonotic introduction of the virus.

Serum and liver samples from 3,080 bats from Panama, Brazil, Gabon, Ghana, Germany, Papua New Guinea, and Australia were screened for HBV-like sequences by polymerase chain reaction (PCR). Ten positive specimens were found from three bat species: Uroderma bilobatum from Panama, and Hipposideros cf. ruber and Rhinolophus alcyone from Gabon. The complete viral genome sequence was determined for 9 of the positive specimens. Phylogenetic analysis revealed that the bat viruses form three different lineages, and that each virus differs by at least 35% from known hepadnaviruses.

The virus from Hipposideros cf. ruber has been named roundleaf bat HBV, while those from Rhinolophus and Uroderma have been named horshoe bat HBV, and tent-making bat HBV.

Viral DNA in the liver of Hipposideros bats was found to be higher than in other organs or serum. Some lymphocyte infiltration was observed in the liver of these animals, as well as deposits of viral DNA within hepatocytes. These observations indicate that the bat HBV viruses likely replicate in the bat liver and cause hepatitis.

Serological studies revealed that hepadnaviruses are widespread in Old World bats: antibodies against bat hepadnaviruses were detected in 18% of hipposiderid bats and 6.3% of rhinolophid bats.

An important question is whether these three bat hepadnaviruses can infect human cells. Only tent-making bat HBV could infect primary human hepatocytes, which occurred via the human HBV cell receptor, sodium taurocholate cotransporting polypeptide. However serum from humans that had been immunized with HBV vaccine did not block infection of human hepatocytes with this virus.

These observations show that viruses related to human HBV are replicating in the liver of bats. Earlier this year another hepadnavirus was identified in long-fingered bats (Miniopterus fuliginosus) in Myanmar. The complete genome sequence was obtained and virus particles were observed in bat liver tissues.

The finding of hepadnaviruses in bats raise many interesting questions. The first is whether human HBV originated by infection with bat HBV, either by consumption of bat meat or another mode of transmission. How long ago this occurred is not known. It has been suggested that HBV has been in humans for at least 15,000 years. Some avian species contain avihepadnaviral sequences integrated into their genome, indicating that these viruses originated at least 19 million years ago.

These findings also raise many questions about the pathogenesis of hepadnaviral infection in bats, including the mode of transmission (in humans, the virus is transmitted by exposure to blood, e.g. by injection or during childbirth), and whether chronic infections can occur as they do in humans.

Finally it is interesting to consider the zoonotic potential of tent-making bat HBV, which can infect human cells. Because bat hepadnaviruses are genetically distinct from HBV, current serological and nucleic acid screening programs would not detect human infections. The authors suggest that human and non-human primate sera from areas in which these bat viruses were isolated should be screened using assays that detect the bat hepadnaviruses. Without such information we do not know if these viruses currently infect humans.