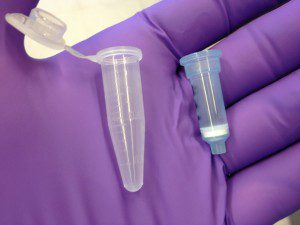 Qiagen spin column at right. The silica layer is white. The spin column is placed in the microcentrifuge tube, left, to remove liquids and elute nucleic acids.

Do you remember the retrovirus XMRV, initially implicated as the cause of chronic fatigue syndrome, and later shown to be a murine virus that contaminated human cells grown in mice? Another virus thought to be associated with human disease has recently been shown to be a contaminant, derived from a piece of laboratory plasticware that is commonly used to purify nucleic acids from clinical samples.

During a search for the causative agent of seronegative hepatitis (disease not caused by hepatitis A, B, C, D, or E virus) in Chinese patients, a novel virus was discovered in sera by next generation sequencing. This virus, provisionally called NIH-CQV, has a single-stranded DNA genome that is a hybrid between parvoviruses and circoviruses. When human sera were screened by polymerase chain reaction (PCR), 63 of 90 patient samples (70%) were positive for the virus, while sera from 45 healthy controls were negative. Furthermore, 84% of patients were positive for IgG antibodies against the virus, and 31% were positive for IgM antibodies (suggesting a recent infection). Among healthy controls, 78% were positive for IgG and all were negative for IgM. The authors concluded that this virus was highly prevalent in some patients with seronegative hepatitis.

A second independent laboratory also identified the same virus (which they called PHV-1) in sera from patients in the United States with non-A-E hepatitis, while a third group identified the virus in diarrheal stool samples from Nigeria.

The first clue that something was amiss was the observation that the novel virus identified in all three laboratories shared 99% nucleotide and amino acid identity. This would not be expected in virus samples from such geographically, temporally, and clinically diverse samples. Another problem was that in the US non-A-E study, all patient sample pools were positive for viral sequences. These observations suggested the possibility of viral contamination.

When nucleic acids were re-purified from the US non-A-E samples using a different method, none of the samples were positive for the novel virus. Presence of the virus was ultimately traced to the use of column-based purification kits manufactured by Qiagen, Inc. Nearly the entire novel viral genome could be detected by deep sequencing in water that was passed through these columns.

Why were the Qiagen spin columns contaminated with the parvovirus-circovirus hybrid? A search of the publicly available environmental metagenomic datasets revealed the presence of sequences highly related to PHV-1 (87-99% nucleotide identity). The datasets containing PHV-1 sequences were obtained from sampled seawater off the Pacific coast of North America, and coastal regions of Oregon and Chile. Silica, a component of spin columns, may be produced from diatoms. If the silica in the Qiagen spin columns was produced from diatoms, and if PHV-1 is a virus of ocean-dwelling diatoms, this could explain the source of contamination.

In retrospect it was easy to be fooled into believing that NIH-CQV might be a human pathogen because it was only detected in sick, and not healthy patients. Why antibodies to the virus were detected in samples from sick and healthy patients remains to be explained. However NIH-CQV/PHV-1 is likely not associated with any human illness: when non-Qiagen spin columns were used, PHV-1 was not found in any patient sample.

The lesson to be learned from this story is clear: deep sequencing is a very powerful and sensitive method and must be applied with great care. Every step of the virus discovery process must be carefully controlled, from the water used to the plastic reagents. Most importantly, laboratories involved in pathogen discovery must share their sequence data, something that took place during this study.