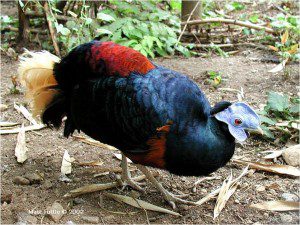 Reticuloendotheliosis viruses (REVs) are retroviruses that cause a rare disease of gamebirds and waterfowl that includes anemia, immunosuppression, neoplasia, runting, and abnormal feathering. Since the first isolation of REV from a turkey in 1957, REVs were believed to be strictly avian viruses. It now appears that REVs are mammalian viruses that were accidentally introduced into birds in the 1930s during research on malaria.

During an investigation of endogenous retrovirus diversity in Malagasy mammals, the authors found sequences related to REVs in the genomes of the ring-tailed mongoose and the narrow-striped mongoose. Phylogenetic analyses revealed that REVs entered the germline of these mammals ~8 million years ago. The entire REV lineage of mammalian and avian viruses Â originated from a common founder that circulated among mammals from 23 to 25 million years ago.

Based on their finding that REVs originated in mammals, the authors attempted to determine when the viruses made the jump into birds. They determined the genome sequence of an REV isolated from a duck, called duck infectious anemia virus (DIAV), and constructed phylogenies with other available REV sequences. Duck infectious anemia virus, and the closely related REV spleen necrosis virus (SNV), were both isolated from ducks that were infected with Plasmodium lophurae in 1959. Apparently the P. lophurae stocks used were contaminated with these viruses.

A search for a strain of malaria that could be used to study the disease in laboratory animals lead to isolation ofÂ P. lophuraeÂ from a Borneo firebacked pheasant in the Bronx Zoo in 1937. AfterÂ P. lophurae was found to infect young chickens, stocks of the parasite were obtained by serial passage in chicken, duck, and turkey chicks. In the 1940s it became clear that the stocks of P. lophurae were contaminated with a separate agent that caused anemia in birds. William Trager in 1959 identified the anemia-inducing agent in stocks of P. lophurae as spleen necrosis virus. Duck infectious anemia virus was isolated in 1972 from P. lophurae stocks. Both SNV and DIAV were considered to be natural viruses of ducks; however it is now clear that both viruses are derived from a single introduction of REV from mammals into birds. Where this occurred is not known, but one hypothesis is that the Borneo firebacked pheasant in the Bronx Zoo, from which P. lophurae was isolated, had acquired the virus from a mammalian species at the zoo.

Stocks of P. lophurae were exhausted in the 1980s and the parasite has never been re-isolated. Since that time, no additional viruses related to SNV and DIAV have been identified, which is consistent with the idea that contaminated stocks of P. lophurae were the origin of these viruses. In China, material contaminated with REV has lead to the circulation of infectious retroviruses in birds.

In another remarkable twist, a DNA copy of the REV genome has inserted into the genome of two DNA viruses that infect birds: fowlpox virus and gallid herpesvirus 2. These viruses circulate in birds, yielding REVs that cause disease, and high antibody levels to REVs in poultry. It is not clear when REV DNA inserted into the genomes of these two DNA viruses. One possibility is that REV spread from infected laboratory birds into the environment, where the virus then recombined with the Â DNA viruses (during World War II stocks of P. lophurae were given to laboratories throughout the US). Another possibility is that REV insertions into the genome of fowlpox virus and gallid herpesvirus 2 occurred in vaccine stocks which were Â contaminated with REV.

This work supports the hypothesis that REVs were introduced into birds iatrogenically (e.g. by medical procedures). REV DNA then integrated into the genomes of an avian poxvirus and a herpesvirus, which now circulate in wild birds and poultry. Had deep sequencing been available in the 1930s, this introduction could have been prevented by analysis of the P. lophurae stocks before their introduction into birds. A similar analysis should be done on any animal-derived stocks that will be used in the laboratory.