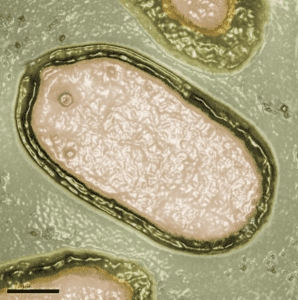 TheÂ discovery of the giant Mimivirus and MegavirusÂ amazed virologists (and also many others). Their virions (750 nanometers) and DNA genomesÂ (1,259,000 base pairs) wereÂ the biggest ever discovered, shattering the notions that viruses could not be seen with a light microscope, and that viral genomes were smaller than bacterial genomes. Now two even bigger viruses have been discovered, which are physically and genetically unlike any previously known viruses. They have been called Pandoraviruses.

Both new viruses were isolated by culturing environmental samples in the amoebaÂ Acanthamoeba castellani.Â Pandoravirus salinusÂ was isolated from shallow marine sediment in a river at the coast of central Chile, andÂ Pandoravirus dulcisÂ was obtained from mud at the bottom of a freshwater pond near Melbourne, Australia. TheÂ P. salinusÂ genome is at least 2.77 megabases in length (there is some uncertainty in the actual length due to the presence of repeated sequences at the ends of the DNA), while theÂ P. dulcisÂ genome is 2.47 megabases in length. The smallerÂ P. dulcisÂ genome is a subset of theÂ P. salinusÂ genome.

These new genomes are twice as large as those of previously described viruses, and bigger than the genomes of intracellular bacteria such asÂ TremblayaÂ (138,927 base pairs) andÂ RickettsiaÂ (1,111,523 bp), some free living bacteria, andÂ many free living Archaea.

While the huge sizes of theÂ PandoravirusÂ virion and genomes are amazing, I find three other features of these viruses even more remarkable. The first is their atypical replication cycle. The virions are taken into amoebae by phagocytic vacuoles, and upon fusing with the vacuole membrane, the virion contents are released into the cytoplasm via a pore on the virion apex. Within 2-4 hours the cell nucleus is reorganized, and by 8-10 hours new particles appear where the nucleus once was.Â PandoravirusÂ DNA and virions are synthesized and assembled simultaneously, in contrast to eukaryotic DNA viruses and phages which fill pre-formed capsids with DNA. Virions are released by 10-15 hours as the cells lyse.

A second amazing feature is that most of theÂ P. salinusÂ open reading frames encode brand-new proteins. Of the 2,556 putative protein coding sequences in theÂ P. salinusÂ genome, 93% have no recognizable counterparts among known proteins. Some of the genes found in large DNA viruses are present, such as those encoding DNA polymerase and DNA-dependent RNA polymerase, and several amino acyl-tRNA synthetases, like members of theÂ Megaviridae. Curiously, many of the Pandoravirus coding regions contain intervening sequences, which must be removed by RNA splicing. This process is known to occur only in the cell nucleus, suggesting that some Pandoravirus transcription occurs in that organelle. The lack of gene homology leads to authors to conclude that ‘no microorganism closely related toÂ P. salinusÂ has ever been sequenced’.

I am also impressed by what the authors describe as the ‘alien morphological features’ of the virions.Â The oval-shaped particles are 1 micron in length and 0.5 microns in diameter, easily visible by light microscopy.Â They are wrapped in a three-layered envelope with a pore at one end of the particle, and resemble nothing that has ever been seen before (see photograph).

How much bigger can viruses get? I don’t know the answer but I would guess even bigger than Pandoraviruses. The membranous Pandoravirus particle could easily accommodate even larger genomes. How big can a virus get and still be a virus? The answer to that question is easy: it is a virus as long as it requires a cell for replication.

These remarkable findings further emphasize the need for scientists to pursue their curiosity, and not only work on problems of obvious medical relevance. As the authors write,

This work is a reminder that our census of the microbial diversity is far from comprehensive and that some important clues about the fundamental nature of the relationship between the viral and the cellular world might still lie within unexplored environments.

Continuing theirÂ playful naming of giant viruses, the authors note that the name Pandoravirus reflects their ‘lack of similarity with previously described microorganisms and the surprises expected from their future study’.