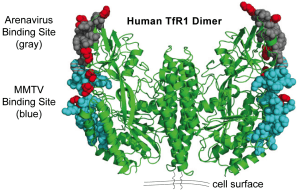 Viruses are obligate intracellular parasites: they must enter a cell to reproduce.Â To gain access to the cell interior, a virus must first bind to one or more specific receptor molecules on the cell surface. Cell receptors for viruses do not exist only to serve viruses: they also have cellular functions. An example is the transferrin receptor, which regulates iron uptake and assists in the entry of viruses from three different families. It might appear that such dual-use proteins cannot evolve to block virus entry because their cellular function would then be compromised. A study of two viruses that bind to the same cell surface receptor protein reveals how a cellular protein can change to prevent infection without affecting its role in the cell.

The virus-cell receptor interaction is one of the many arenas where the evolution of host-virus conflict can be studied. Because the virus-receptor interaction is essential for viral replication, host cells with a mutation in the receptor gene that prevents virus infection survive and eventually dominate the population. A virus could overcome this block with an amino acid change allowing binding to the altered receptor.Â Mutations that alter the interaction to favor the virus or the host are called ‘positively selected’ mutations.Â Such back-and-forth evolution between viruses and their host cells has been called host-virus arms races. Most have been identified by studying antiviral genes. This study is unusual in that it involves a housekeeping gene that has been usurped for viral attachment.

To determine if the transferrin receptor (TfR1) has evolved to prevent virus attachment, sequences of the protein from seven different rodent species were compared. The analysis revealed that much of the protein is highly conserved, but a small part, comprising six amino acids, is evolving rapidly. Three of these amino acids Â are located on the part of TfR1 that binds arenaviruses, and three are at the binding site for the retrovirus mouse mammary tumor virus (MMTV) (see illustration). Changing these three amino acids of TfR1 of the house mouse, which is susceptible to MMTV, to the sequence found in TfR1 of the MMTV-resistant vesper mouse, blocked entry of the virus into cells. In turn, changing these three amino acids of TfR1 of the MMTV-resistant short-tailed zygodont to the sequence of the house mouse enabled virus entry into cells. None of these changes had an effect on ferritin binding by TfR1.

Evidence for positive selection can also be detected in viral genes encoding proteins that interact with the host. The arenavirus glycoprotein, GP, is known to bind to TfR1. Ten GP amino acids were identified that are under positive selection, and four of these directly contact TfR1.

These findings demonstrate that there has been an arms race between TfR1 and both an arenavirus and retrovirus.Â An interesting question is whether human TfR1 will enter into an arms race with arenaviruses. As these viruses emerge into the human population, it is expected that humans with mutations that make them less susceptible to infection or severe disease will be positively selected. Amino acid 212 of human TfR1, which is near the positively selected resides in murine TfR1, varies in the human population. When this amino acid change (leucine to valine) is introduced into TfR1, it confers some protection against arenavirus entry. Curiously, this polymorphism has only been found in Asian populations, where arenaviruses that bind TfR1 are not found. The polymorphism is probably neutral with respect to TfR1 function, and if TfR1-binding arenaviruses are introduced into Asia, this change could be positively selected.

Because all viruses depend on many host proteins for replication, it will be interesting to use this approach to see how other highly conserved cell proteins balance cell function with the ability to resist virus infections. There are like to be many cell proteins that cannot change to evade viral use without destroying their cell function. Fortunately for cells there are exceptions.