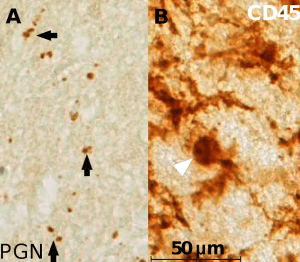 Microbial communities are found at many different sites on the human body, including nasal passages, oral cavities, skin, gastrointestinal tract, and urogenital tract. These commensal microbes shape the immune and metabolic status of the host and play important roles in human health and disease. The brain is one organ that has been assumed to be sterile in the healthy host, but this is probably not true – apparently we have bacteria in our brains!

This remarkable observation came about as part of a study to determine if AIDS, a disease known to damage the blood-brain barrier, might lead to the presence of bacteria in the brain. Autopsy-derived cerebral white matter was obtained from AIDS patients; controls included material from individuals who died of other causes (including cerebral infarction, meningitis, and encephalitis), and also brain tissue collected during surgical resection for epilepsy. Total RNA was prepared, copied into DNA, and subjected to massively parallel sequencing. The results showed that all patient samples contain sequence tags for alpha-proteobacteria (>70% of bacterial sequences). Other bacteria representing 30% of the sequences were not universally present. Alpha-proteobacteria do not predominate in other body sites where the microbiomes are dominated by Firmicutes, Bacteriodetes and Actinobacteria. Staining of sections of human brain with antibodies to peptidoglycan, a component of the bacterial cell wall, suggest that the bacteria areÂ localized mainly in glia (photograph).

To demonstrate that live alpha-proteobacteria are present in the brain specimens, homogenates of brain samples were prepared and inoculated intracerebrally into immunocompromised mice. Sequence analysis of mouse brain RNA done seven weeks later revealed mainly alpha-proteobacteria. Transfer of the bacteria was not observed after heat-treatment of the brain homogenate.

Some viral sequences were also detected in human brain samples. Human herpesvirus-6, Epstein-Barr virus, cytomegalovirus, and coronavirus nucleic acids were detected in some but not all patient samples, while varicella-zoster virus, herpes simple virus type 1, and Saffold virus were not detected in any specimens.

The presence of bacteria in human brain, regardless of underlying disease process, is remarkable. One explanation for this finding might be that soon after death, bacteria invade the brain. This scenario seems unlikely as the findings indicate that the bacteria present in the human brain do not appear to be derived from other body sites. Some of the many questions that come to mind include: Are brain bacteria beneficial, like other components of our microbiome? Is the brain microbiome present at birth or acquired? Do alterations of the brain microbiome lead to human neurological diseases?

We discussed this seminal paper on episode #58 of the science show This Week in Microbiology. Listen to this episode at microbeworld.org and hear our amazement as the story unfolds.