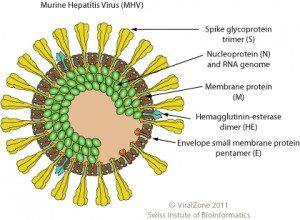 Viruses are obligate intracellular parasites, which means that they must enter a cell to reproduce. As virions are too large to diffuse passively across the plasma membrane, cellular pathways for uptake of extracellular materials provide entry routes. The first step in entry is adherence of virus particles to the membrane, an interaction mediated by binding to one or more receptor molecules on the cell surface. Identification of cell receptors for viruses is an important objective because their study may lead to information about how the virus enters the cell, how it is targeted to specific tissues, and how it causes disease. The cell receptor for the recently identified coronavirus-EMC, which has so far infected 15 humans with 9 deaths, has been identified as dipeptidyl peptidase 4 (DPP4).

Enveloped viruses such as CoVs typically attach to cell receptors via spike glycoproteins embedded in the viral envelope. To identify the CoV-EMC receptor, part of the viral spike (S) glycoprotein was expressed as a fusion protein with the Fc domain of IgG antibody. The protein was mixed with lysates of cells known to be infected with CoV-EMC, and bound proteins were isolated by using agarose beads bound to protein A (which binds the Fc domain). A single polypeptide bound to the CoV-EMC spike protein was identified as DPP4. Four different lines of evidence indicate that DPP4 is a bona fide receptor for CoV-EMC:

Considering that CoV-EMC was isolated in November 2012 from a sick patient, the identification of the cell receptor is indeed rapid progress.

CoV-EMC is believed to have originated in bats. Consistent with this hypothesis, expression of bat DPP4 confers susceptibility to the virus, although not to the same extent as human DPP4. Once the bat precursor of CoV-EMC is identified, it will be interesting to determine how the viral spike glycoprotein has evolved to enable more efficient usage of human DPP4.

DPP4 is a transmembrane protein that regulates the activity of hormones and chemokines through proteolytic cleavage. The cell receptors for two other CoVs are also membrane-bound peptidases, but proteolytic activity is not needed for infection. A soluble form of DPP4 is also present in blood. The authors speculate that reduction of DPP4 protein levels by CoV-EMC infection could result in higher virus-induced disease. If DPP4 is important in regulating the activity of cytokines – major components of immune responses – their removal from the circulation could result in greater virus replication and more tissue damage. It will be important to study the levels of DPP4 in humans infected with CoV-EMC, and to determine whether levels of the receptor affect viral disease.