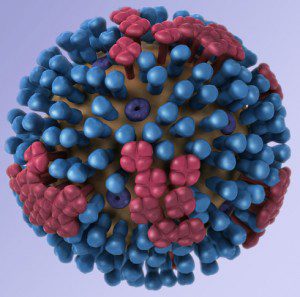 The Centers for Disease Control and Prevention has released early estimates of the effectiveness of this season’s influenza vaccine in preventing influenza infection.

Influenza vaccine effectiveness is assessed each year by the U.S. Influenza Vaccine Effectiveness Network. Patients with acute respiratory infection (ARI) are enrolled in the study; respiratory samples are taken and the presence of influenza virus is determined by polymerase chain reaction.

Data from 1,155 children and adults with ARI during December 3, 2012â€“January 2, 2013 were collected at five study sites and used to determine that the estimated vaccine effectiveness is 62% (95% confidence intervals = 51%â€“71%). This number representsÂ the overall effectiveness of seasonal influenza vaccine for preventing laboratory-confirmed influenza virus infection associated with acute respiratory infection.

It is known that this season’s influenza vaccine is a good match for the circulating viruses. Why then is vaccine effectiveness only 62%? Although the study does not distinguish between patients who received the inactivated (injected) or the infectious (intranasal) vaccine, most vaccine distributed in the US is the former. Because the inactivated vaccine is treated with formaldehyde and detergents, the viral proteins are not in their native state and do not produce the correct antibodies for optimal protection. Because the intranasal vaccine contains infectious virus, the viral proteins are unaltered and induce antibodies that are more protective. In children less than 7 years old, the intranasal vaccine provides a higher level of protection than the inactivated vaccine. It’s unfortunate that the influenza vaccine needs of the US cannot be met by current supplies of FluMist.

Based on the results of this and similar studies, some argue that it is not worth being immunized against influenza. This reasoning is faulty. Even if you are immunized and subsequently contract influenza, you are likely to be less sick than if you had not received the vaccine. According to CDC:

Influenza vaccination, even with moderate effectiveness, has been shown to reduce illness, antibiotic use, doctor visits, time lost from work, hospitalizations, and deaths.