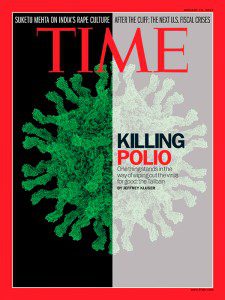 Poliovirus has made the cover of Time magazine.

The Time cover image for the 14 January 2013 issue is a model of poliovirus bound to a soluble form of its cellular receptor, CD155. I was part of the team that solved the structure of this complex in 2000, together with the laboratories of Jim Hogle and Alasdair Steven. The structure of the same complex was also solved by Rossmann’s group. The image that Time used for the cover was produced by Laguna Design, although I do not know whether they used our structural information or Rossmann’s.

The Time cover image is accompanied by the text: One thing stands in the way of wiping out the virus for good: the Taliban. It’s a good thing for Time to highlight the polio eradication effort. However, as Alan Dove wrote to me, “I’m also glad to see from the headline that the Taliban is the only obstacle to eradication now. Would love to hear how they’ve solved the problems with vaccine derived strains, chronic secreters, finding all the remaining stocks, and covering Nigeria.”

The issue contains an article by Jeffrey Kluger, author of Splendid Solution: Jonas Salk and the Conquest of Polio. I wrote a review of the book for the Journal of Clinical Investigation, which is available online as anÂ open access article.

When I visited the University of Michigan in 2011, Stefan Taube gave me a model of the poliovirus-receptor complex that he had produced on a three dimensional printer (photograph below). I think it would have looked better on the cover of Time.

Update: I do have a problem with the Time headline ‘Killing Polio’. How can you kill something that is not alive?