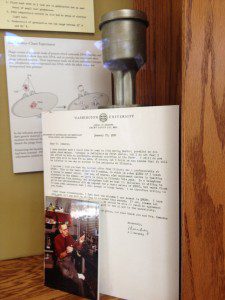 Should you ever visit Cold Spring Harbor Laboratory on Long Island, New York, be sure to go see the food blender that was used to carry out the well known Hershey-Chase experiment. The blender is located in the Szybalski Reading Room of the Carnegie Library. After entering the front door of the library, walk straight back, enter the Szybalski Room, and turn right to find the blender in a display case.

At left is a photograph of the blender, partially hidden behind a letter (click the photo for a larger view). You can see the cap of the blender and the main body into which liquids are poured. I presume the motor is hidden from view. Behind the blender is a diagram of the Hershey-Chase experiment.

The letter is also worth reading because it concerns salary negotiations between Hershey and Milislav Demerec, who was the President of Cold Spring Harbor Laboratory from 1940 to 1960 (at that time it was called the Carnegie Institute of Washington). The letter is dated 15 January 1950 and was written while Hershey was at Washington University in St. Louis, MO:

I have decided that I would like to come to Cold Spring Harbor, provided we can agree about salary. Carnegie is my first choice, but I do not feel that I can make an appreciable monetary sacrifice in its favor. I still do not know what will be done for me here, of course, but I think we can assume that it will be inferior in one way or another to the prospects at Illinois.

I believe I told you that the offer from Illinois was a professorship at $7000. This is the basic salary for nine months, to which is added $1500 if I teach a course in summer school. One can, of course, also supplement income by teaching elsewhere in the summer, as Luria is doing in Colorado this year. In a telephone conversation this morning, Dr. Spiegelman* told me that Dr. Halvorson is willing to go to the administration with my request for a basic salary of $8000, but wants first to have some assurance that I will accept on those terms. I am therefore writing to you first.

Under these circumstances, I feel that the minimum I can accept is $8000. I hope very much that you will be willing to consider this amount.

The letter is interesting not only because of the $8000 yearly salary that Hershey requests, low by today’s standards, but also his candor in writing to Demerec.

In front of the letter is a photograph of Al Hershey in the laboratory. On This Week in Microbiology #40 Waclaw Szybalski noted that Hershey was not happy when his experiments did not work. In the photo he is pipetting and looking very serious; I wonder what was the outcome of that experiment. 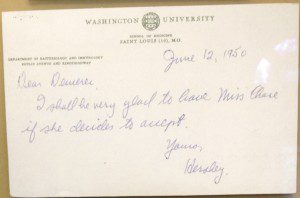 Also in the case is a brief handwritten note from Hershey to Demerec written on 12 June 1950:

I shall be very glad to have Ms. Chase if she decides to accept.

*Sol Spiegelman was on the faculty of the University of Illinois and presumably was attempting to recruit Hershey. Years later Spiegelman was a Professor at Columbia University. In 1982 he interviewed me for a faculty position in the Department of Microbiology. He was instrumental in obtaining extra start-up funds for my laboratory to match other offers that I had obtained. He recruited me to Columbia but he could not attract Hershey to Illinois.