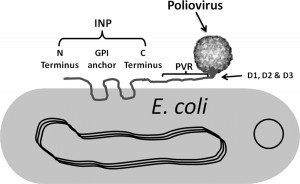 When my laboratory discovered the cell receptor for poliovirus in 1989, many new research directions were suddenly revealed – such as creating a mouse model for poliomyelitis. One application we did not think of was to use the receptor to screen samples of drinking water for the presence of viruses.

Contamination of the water supply with fecal material can lead to the presence of enteric viruses, which constitute a public health risk. A variety of methods have been developed to screen for viruses in water samples using cell culture or nucleic acid detection techniques. Because the numbers of human viruses in water samples are low, a concentration step must usually be included. These are typically laborious and costly, and innovative improvements are needed. Enter CD155, the cellular receptor for poliovirus, which the authors used as a model for developing a new way to concentrate viruses from water samples.

Viral receptors, which are present on the surface of susceptible cells, are very efficient at capturing viral particles. Why not put these receptors on the surface of bacteria, where they can bind to viruses? Concentrating the viruses would then be a simple matter of centrifuging the bacteria from the water sample. This concept was tested by using poliovirus and the poliovirus receptor.

When the PVR-INP gene was expressed in E. coli, the fusion protein was located to the surface of the bacteria, where it could bind poliovirus. The recovery efficiency was then tested by adding poliovirus to tap water, saline, and samples from several local rivers. The engineered bacteria were added to the poliovirus-laced waters and mixed for 20-60 minutes. The bacteria were then removed by low speed centrifugation, and the viral titers in the cell and in the liquid sample were determined by plaque assay. The recovery of infectious virus ranged from 99% (saline samples) to 75% (river water).

These findings demonstrate that recombinant bacterial cells can be used to capture virus particles in different types of water samples. Compared with other water concentration methods, centrifugation is inexpensive and easy. Whether or not this assay is sensitive enough to detect low levels of viruses in drinking water and other samples must still be determined.

In a way it is fitting that bacteria have been used to capture poliovirus. After all, poliovirus initially replicates in the gastrointestinal tract, where the microbial flora (including E. coli) helps the virus invade the host.