Ron Fouchier has discussed his influenza H5N1 transmission experiments in ferrets at anÂ ASM Biodefense Conference, clarifying severalÂ assumptions about the transmissibility of the virus in this animal model.

Two different influenza H5N1 strains were used for Fouchier’s experiments: a wild type virus, and a mutated virus (we’ll call it mutH5N1). He did not reveal the nature of the mutations in this virus but from previous reports they consist of changes introduced into the viral HA protein to allow binding to sialic acid receptors in the avian respiratory tract, and other changes selected during passage in ferrets. 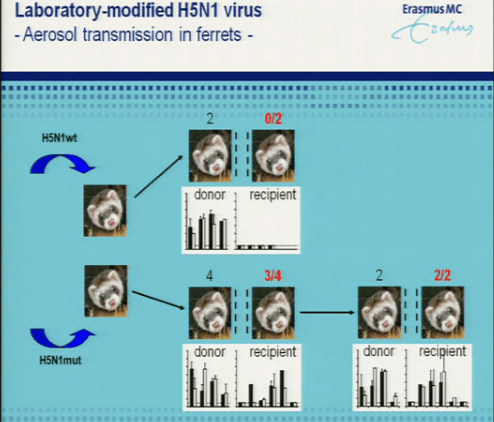 Fouchier concluded that this work identified the mutations that are needed for H5 transmission between ferrets.

Next Fouchier indicated that because the work has not yet been published, and the press has ‘picked up on it’, there are many misconceptions about what can or cannot be concluded. For example, it has been suggested that this virus would spread ‘like wildfire’ if it were to get out of his facility. He presented data indicating that this would not be the case. Although his results demonstrate aerosol transmission of H5N1 among ferrets, the assay is not quantitative, and therefore the efficiency of transmission cannot be deduced. He showed results of ferret transmission studies using the 2009 H1N1 pandemic influenza virus strain. This virus spreads to all ferrets by aerosol and replicates to high titers in the respiratory tract. In comparison, the mutH5N1 virus does not transmit to all ferrets, virus titers are lower, and shedding does not begin until later in infection. He concluded that the mutH5N1 virus does not transmit among ferrets as does a pandemic or seasonal influenza virus.

The second misconception that he addressed is that the mutH5N1 virus would be highly lethal. He showed the results of experiments demonstrating that when ferrets are inoculated intranasally with high doses of mutH5N1 virus, only 1/8 animals show signs of disease. In contrast, 2 of 2 ferrets developed disease when inoculated in the same way with wild type H5N1 virus. When the mutH5N1 virus is transmitted to ferrets via aerosol, none of the recipient animals develop disease. Only when the mutH5N1 virus is delivered to the lower respiratory tract of ferrets by intratracheal intubation does the virus cause disease in 6 of 6 animals.

Finally, Fouchier showed that pre-exposure of ferrets to seasonal influenza virus protects them from disease caused by H5N1 viruses. These findings are summarized on the following figure. 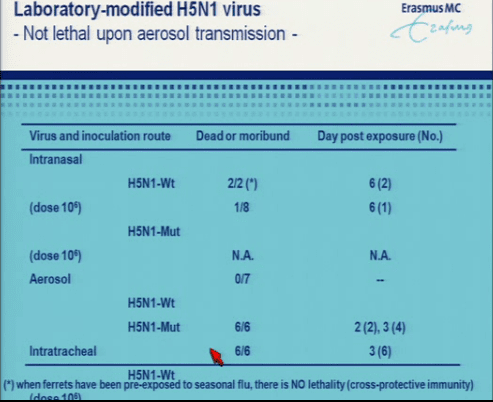 After this presentation Dr. Anthony Fauci, head of the National Institute of Allergy and Infectious Disease, said thatÂ â€œThere is a gross, pervasive misunderstanding out there,â€ and recommended that the data be re-examined by the NSABB.

The data presented by Fouchier appear to be at odds with the conclusions of the NSABB to redact publication. They are also not consistent with statements made by Fouchier and others to Science magazine in November 2011. For example, Fouchier called mutH5N1Â “probably one of the most dangerous viruses you can make”, and Paul Keim, head of the NSABB, saidÂ “I can’t think of another pathogenic organism that is as scary as this one.”

Update: Here is what Fouchier said about his work at the Malta meeting in September 2011, as reported by New Scientist. The article begins with the statement:

…five mutations in just two genes have allowed the virus to spread between mammals in the lab. What’s more, the virus is just as lethal despite the mutations.

Fouchier is quoted as sayingÂ “The virus is transmitted as efficiently as seasonal flu.” This is in direct contrast to what he reported at the ASMBiodefense meeting.

In describing the passage of H5N1 in ferrets, the writer concludes:

The tenth round of ferrets shed an H5N1 strain that spread to ferrets in separate cages – and killed them.

Again this is in direct contrast to what Fouchier reported this past week.

I do not understand the difference between what Fouchier said in Malta in 2011 and in Washington, DC in February 2012. However, there is one way to explain the apparent paradox, which derives from the following statment from the New Scientist article:

The process yielded viruses with many new mutations, but two were in all of them. Those plus the three added deliberately “suggest that as few as five are required to make the virus airborne”, says Fouchier. He will now test H5N1 made with only those five.

Perhaps the results that Fouchier reported in Washington, DC are from experiments using H5N1 virus with only those five mutations.