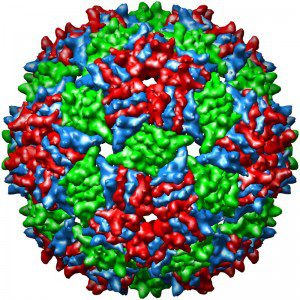 Norton Zinder made two important discoveries in the field of virology. While a Ph.D. student with Joshua Lederberg at the University of Wisconsin-Madison he found that viruses of bacteria (bacteriophages) could move genes from one host to another, a process called transduction. Later in his own laboratory at The Rockefeller University he isolated the first bacteriophages that contain RNA as genetic material. These were seminal findings in the growing field of molecular biology.

By the 1950s it was well known that different strains of the bacterium Escherichia coli could exchange genes in a process called recombination. Zinder wanted to know if other bacteria could also exchange genes in a similar manner, and therefore began to study Salmonella typhimurium. The strains that Zinder used for his experiments were lysogens: their chromosomal DNA contained integrated copies of the DNA genomes of bacteriophages. Zinder readily detected genetic exchange in Salmonella, but suspected that the latent phages might play a role. To test this idea, he grewÂ Salmonella in tubes that were connected by a fine filter that allowed passage of viruses but not bacteria between the two cultures. The results showed that a filterable agent, or virus, could mediate the exchange of genetic material between bacterial strains; direct contact between bacteria was not necessary. The authors coined transduction to describe this process. We now understand that transduction occurs because bacteriophages may incorporate bacterial DNA into the viral particle. Transduction remains aÂ common tool to stably introduce a foreign gene into a host cell.

Zinder describes theÂ discovery of RNA-containing bacteriophages, which took place after he had moved to The Rockefeller University, in the Preface to RNA Phages:

In the late fifties, Tim Loeb, a new graduate student at The Rockefeller University, came into my laboratory and asked whether I thought it was possible that there were male-specific bacteriophages for E. coli. I….quickly responded in the affirmative and off he went to a raw sewage plant in New York City. …f2, the second isolate, was chosen for further study. Little did we think at the time that a whole new area of study was in the offing….

The first two bacteriophages that Loeb had isolated from New York City sewage were called f1 and f2. During purification of the phages it was clear that the genome of f1 was DNA. Chemical analyses subsequently demonstrated that the genome of f2 was RNA (later found to be positive-strand RNA). Similar phages were since isolated all over the world, and their study provided much basic information on viral replication, protein biosynthesis, and genome replication. The first genome sequence determined was in 1976 for the related RNA bacteriophage MS2.

Update: Moving eulogy by Jeffrey Ravetch in Eulogy for a brilliant mentor and teacher.