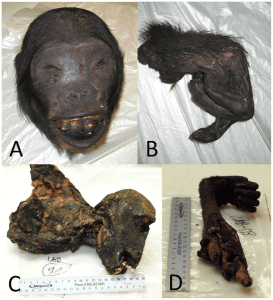 The finding of viral nucleic acid sequences in illegally imported wildlife products has attracted the attention of the New York Times, which published an article entitled From the jungle to J.F.K., viruses cross borders in monkey meat. It begins with a scary scenario:

This may read like a passage from a Richard Preston novel, but all an enterprising virus needs to do is jump aboard a traveling human or animal, and bam â€” the potential for a catastrophe akin to the 1918 Spanish influenza pandemic could emerge. Thatâ€™s why the Centers for Disease Control and the Wildlife Conservation Society decided to undertake their first surveillance efforts for diseases of animal origins crossing in the United States.

However, the PLoS One paper that is cited in support of this story found short viral sequences, not viruses, in material confiscated at several airports. The authors of this report extracted nucleic acids from confiscated specimens (which included fresh, raw, lightly smoked or dried samples from chimpanzees, mangabeys, guenons, and rats) and screened them for pathogen nucleic acids by polymerase chain reaction (PCR). The authors note that “RNA quality was low with a predominance of degraded, low molecular weight fragments in the samples”.Â They identified small PCR DNA products from the genomes of simian foamy virus (a retrovirus) and herpesviruses in 15 out of 48 specimens. No complete viral genomes or infectious viruses are reported in the paper.

Perhaps the Times was mislead by the title of the PLoS One paper:Â Zoonotic Viruses Associated with Illegally Imported Wildlife Products. The abstract is similarly misleading:

The authors correctly report their results at the end of the introduction:

Infectious viruses might accompany importedÂ smoked monkey heads, dried bats and rat parts. The presence of small fragments of viral nucleic acids suggests that these materials were indeed once infected. But it is a large leap of faith to suggest that infectious agents are still present. It’s a good idea to use PCR to screen such material, but it is important to be specific when reporting the results. My suggestions for revised titles:Â Zoonotic viral sequences associated with illegally imported wildlife products (PLoS One) andÂ From the jungle to J.F.K., small fragments of viral nucleic acids cross borders in monkey meatÂ (NY Times). Far less interesting, but factually correct.