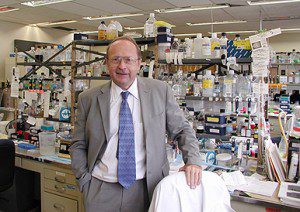 Renowned influenza virologist Peter Palese has penned an opinion column for the science journal Nature in which he uses his experience in reconstructing the 1918 pandemic influenza virus strain to question the censoring of H5N1 results by theÂ National Science Advisory Board for BiosecurityÂ (NSABB):

My colleagues and I were at the centre of a similar controversy in 2005, when we reconstructed the 1918 flu virus, which had killed up to 50 million people worldwide.

As Palese and colleagues readied a manuscript describing these remarkable findings, the NSABB intervened. Palese explained why publishing the work would allow studies on why the virus is dangerous. The NSABB agreed and allowed publication. That was an important stimulus for work on the virus:

After we published our full paper…researchers poured into the field who probably would not otherwise have done, leading to hundreds of papers about the 1918 virus. As a result, we now know that the virus is sensitive to the seasonal flu vaccine, as well as to the common flu drugs amantadine (Symmetrel) and oseltamivir (Tamiflu). Had we not reconstructed the virus and shared our results with the community, we would still be in fear that a nefarious scientist would recreate the Spanish flu and release it on an unprotected world. We now know such a worst-case scenario is no longer possible.

In light of this positive experience, Palese does not understand why the NSABB today does not want to make public the mutations that allow aerial transmission of H5N1 in ferrets. He believes that knowing the mutations will allow a rapid response if they are observed in nature. His conclusion:

The more danger a pathogen poses, the more important it is to study it (under appropriate containment conditions), and to share the results with the scientific community. Slowing down the scientific enterprise will not ‘protect’ the public â€” it only makes us more vulnerable.

Why is the NSABB taking a different stance on influenza research today compared with 2005? A major factor may be the perception that the fatality rate of H5N1 influenza virus in humans is 60%, compared with 2.5% for the 1918 H1N1 strain – although the latter is not insignificant. As I have pointed out previously, that assumption is incorrect.

Palese hopes that the scientific community will convice the NSABB to change its mind – otherwise who will enter a field in which you cannot publish your most interesting results?