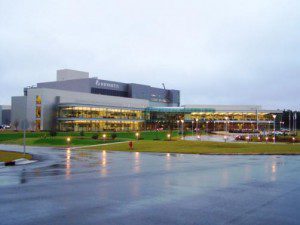 The United States has provided a large sum of money to pharmaceutical giant Novartis to produce influenza vaccines grown in cell culture. According to CIDRAP:

Novartis’s US efforts have been spurred by two major federal contracts. In 2006 the firm won a $220 million HHS contract to develop cell-based flu vaccines, and in January 2009 HHS awarded a $487 million contract to help build the Holly Springs facility.

The facility consists of six connected buildings with 430,000 square feet of manufacturing, laboratory, and office space on a 167-acre site, Novartis reported in a news release. The company has about 400 employees there now and plans to expand to 500 by the end of 2012. Power said the facility is expected to be ready for full-scale commercial production in 2013.

Is this a good investment of US science dollars? Consider the following points:

We need a completely different influenza virus vaccine, not a retread of the existing process. Promising new approaches include virus-like particle vaccines produced in plants that can be made cheaply, rapidly, and appear to be immunogenic and safe in humans. Influenza vaccines that can protect against all viral strains now seem possible, and these vaccines will probably not be based on growing influenza viruses in eggs or cell culture.

I suspect that contemporary influenza vaccines produced in eggs or cell culture will be replaced with new vaccines within the next decade. With all this in mind, does it make sense to invest $707 million in a vaccine that has such a short life span? Even more money is at stake – according to CIDRAP, “Novartis is one of five companies that received sizable HHS contracts in 2006 to develop cell-based vaccines.”Â The new Novartis plant will not be able to supply all the influenza vaccine required by the US (and having a sole supplier is not a good idea). Are there enough individuals with severe egg allergies to justify this investment? Or is this a project that seemed like a good idea in 2006 but is now an anachronism?