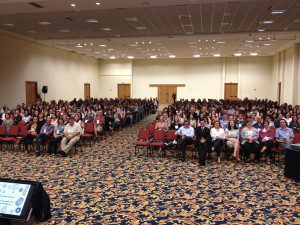 I was honored to present the Keynote Address at the XXII meeting of the Brazilian Virology Society on 23 October 2011. In my talk entitled The World of Viruses, given to an audience of 640 virologists, I shared my enthusiasm for these amazing microbes by discussing ten seminal virologists and ten compelling virology stories of recent years.

Before I began the presentation, I asked the audience to smile and took the photograph at left. Within a few minutes there were no empty seats in the room.

Watch the video of The World of Viruses below, or view at YouTube.