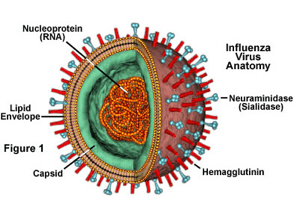 Recent research has suggested a new method of flu prevention and treatment: the administration of granulocyte macrophage-colony stimulating factor (GM-CSF) to the lungs of mice significantly reduced flu symptoms and prevented mortality after a lethal dose of influenza virus. GM-CSF helps the body defend against the virus by boosting the presence of alveolar macrophages (AM), which are essential parts of innate defense.

Currently, there are two main methods of flu prevention and treatment: vaccines and antivirals. Vaccines work by priming the adaptive immune system against antigens in the virus from the preceding flu season (specifically, hemagglutinin and neuraminidase). They are, however, limited by the frequent genetic mutations in the influenza genome that cause antigenic drift, which in turn reduces vaccine potency. Additionally, an individual exposed to the virus not long before or after vaccination may still get sick. Antivirals for influenza mimic sialic acid, which is a natural ligand of neuraminidase, and effectively prevent newly-created virus particles getting “un-stuck” from the cellular membrane. However, in order for antivirals to be effective against flu, they must be administered within 48 hours after infection. Further, the efficacy of influenza antivirals, such as in the case of Tamiflu, can be reduced by drug-resistant strains of the virus.

In the experiment, several mice were treated with GM-CSF for a week before infection with influenza virus, and immune response, amount of virus in the body, and lung tissue damage were all measured. It was found that elevated presence of GM-CSF in mouse lungs conferred significant protection against lethal influenza infection, and that pulmonary injury was also reduced. GM-CSF acts by increasing AM presence in the lungs, and this helps to develop a faster immune response in the host.

GM-CSF therapy has several advantages over current methods of dealing with influenza. Unlike vaccines, GM-CSF does not rely on the body being able to mount an adaptive immune response to the virus, and treatment is not strain-specific. Mice in the experiment were first infected with PR8 H1N1, a laboratory strain, and in subsequent trials with three other strains (H3N2 HK68, and mouse-adapted H1N1 California/04/09 2009 pandemic strain). GM-CSF in the lung protected against all of these strains. The results of the tests were also unambiguous: every SPC-GM mice, which only expressed GM-CSF in the lungs, survived, while all the mice expressing no GM and the wild type mice died. Additionally, it is unlikely that viruses will develop immunity to GM-CSF, which presents a constant problem in antiviral treatment.

There were also general benefits to GM-CSF therapy. One was less collateral damage: while inflammation on the first day of infection was higher in SPC-GM mice than in wild type ones, it began to resolve after six days in SPC-GM mice, while the effects could still be seen in the non-mutated mice. Uncontrolled cytokine release was also limited in SPC-GM mice, minimizing tissue damage, and the augmented production of cytokine IL-20 at latter stages of infection helped to further tone down pulmonary inflammation.

The study suggested that the SPC-GM mice had a more rapid immune response.

Additional analysis of lung tissue and virus content proved that the presence of GM-CSF led to less mortality and lung damage than in the case of regular mice.

The study also demonstrated that alveolar macrophages are essential for conferring resistance to influenza for mice, and that they were most critical in the first three days after infection. This short window of maximum AM efficacy (and therefore GM-CSF efficiency) brings up the problems associated with, for example, TamiFlu: will animals (especially humans) be able to get them in time after noticing flu-like symptoms? Additionally, we have to recall that GM-CSF was given to mice before infection. It is therefore also necessary, as the scientists behind this report noticed, to evaluate whether dosing after infection will be equally, if at all, effective.

In terms of the high variability of virus antigen, while four strains were tested in this study, it is still uncertain whether it will be effective for many other kinds of influenza virus present in the world. Finally, it should be noted that highly lethal viruses were used here, while humans tend to be infected with milder strains of flu; the experiment therefore may not be entirely applicable.

In all, while this is a very promising finding that takes advantage of a therapeutic pathway not previously studied, much work remains for scientists before GM-CSF can be evaluated for its potential therapeutic use in humans.