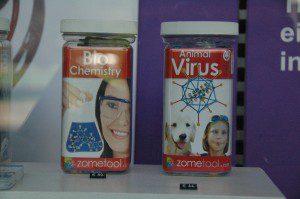 I just returned from a 17-day, 3,000 km road trip with my family in Europe. When I travel I’m always on the lookout for virus-related information and I found some at the Deutsches Museum in Munich, Germany.Â This museum showcases science and technology – it has over 100,000 objects illustrating the historical progression of areas such as mining, atomic physics, water transport, electricity, and much more. Katharina Eisenacher made it her pick of the week on TWiV 102; she said it was a fabulous museum and now I understand why! Let me show and tell you about the virology that I found there. All of the photographs can be clicked for a larger view.

On our way to the museum entrance we passed the gift shop, where two kits were prominently displayed in the window. TheÂ animal virus kit can be used to build a model of what looks to be adenovirus,Â complete with capsid and a small piece of nucleic acid. The biochemistry kit can presumably be used to build organic molecules. Both are unfortunately rather expensive: 44 euros for the animal virus kit, which is about $63 US. The kits are slightly cheaper on the company website, Zometool: the animal virus model costs $35. I’m going to order one and let you know how it turns out. Even at $35 the virus kit is too expensive; I would price it low enough so that more kids can learn about viruses. Building a virus model, and holding it, is a great way to become familiar with these microbes.

One room dedicated to modern-day appliances contained an exhibit on polio. An actual iron lung was displayed in front of a famous photograph of a ward containing many of these devices that were used to facilitate breathing of polio patients. For a polio researcher such as myself this was a special treat, particularly since I have never seen an iron lung! Those are my two sons checking it out; they were fascinated. 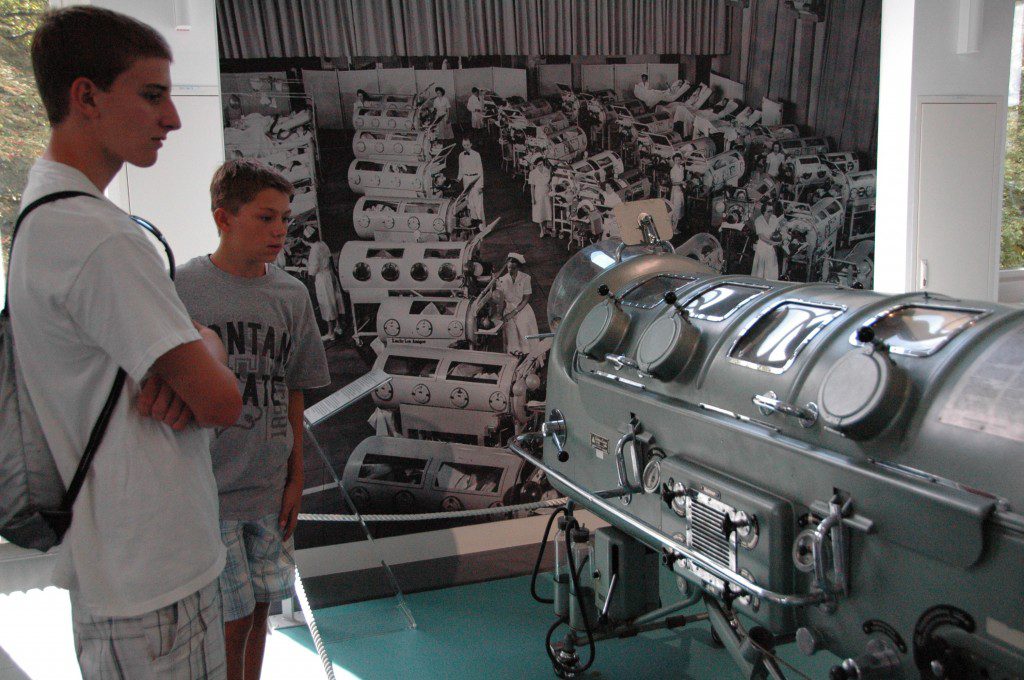 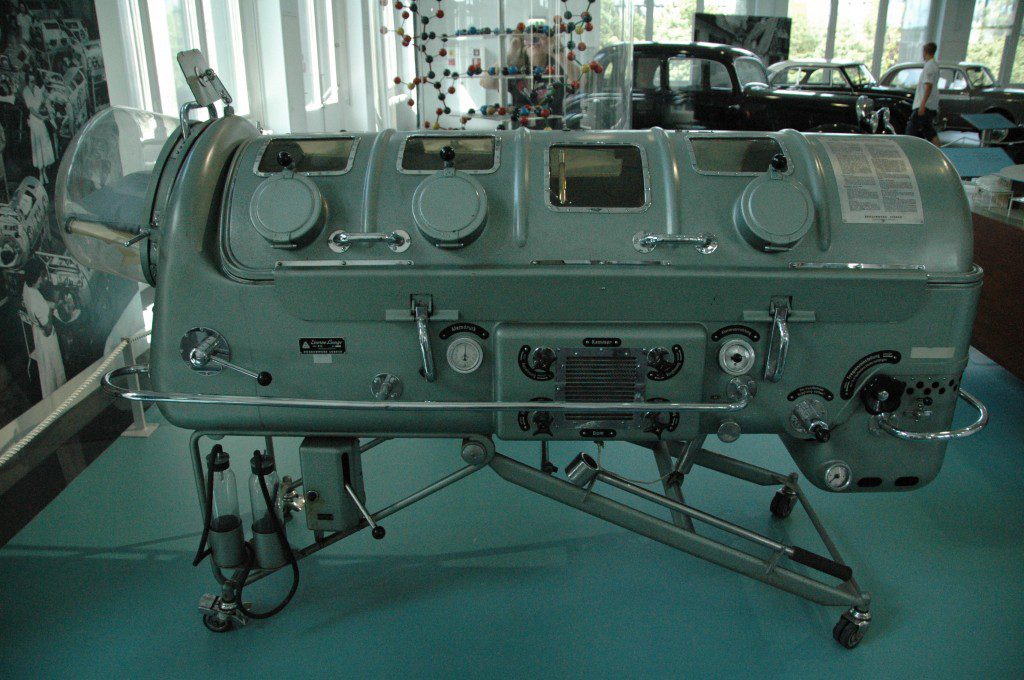 Here is the text associated with the iron lung. Very well done. 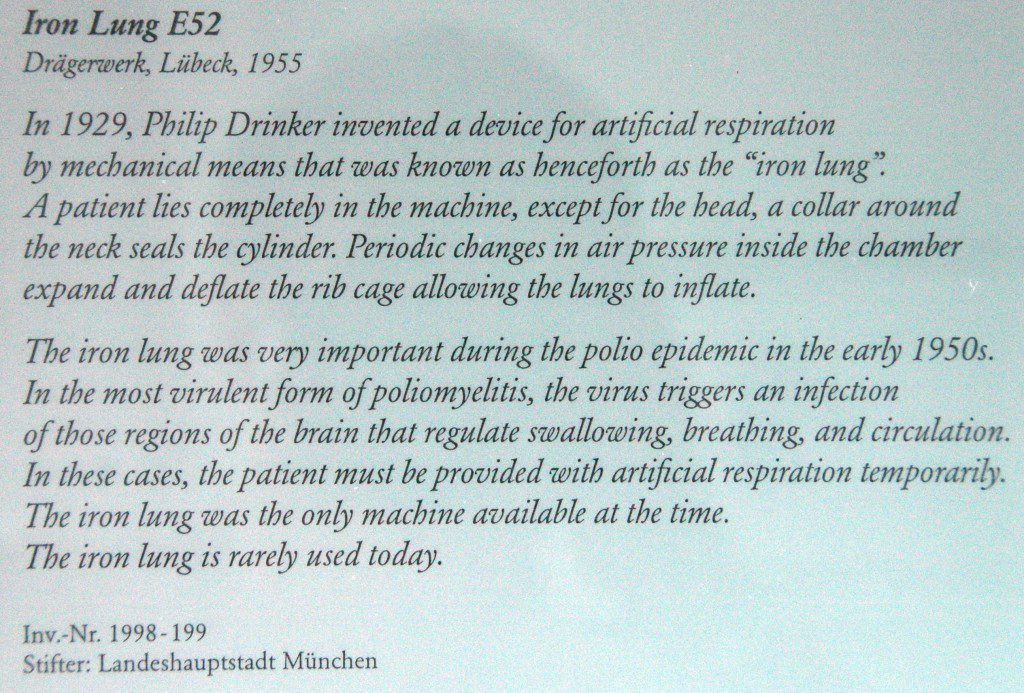 Next to the iron lung was a glass case containing a package of poliovirus vaccine: 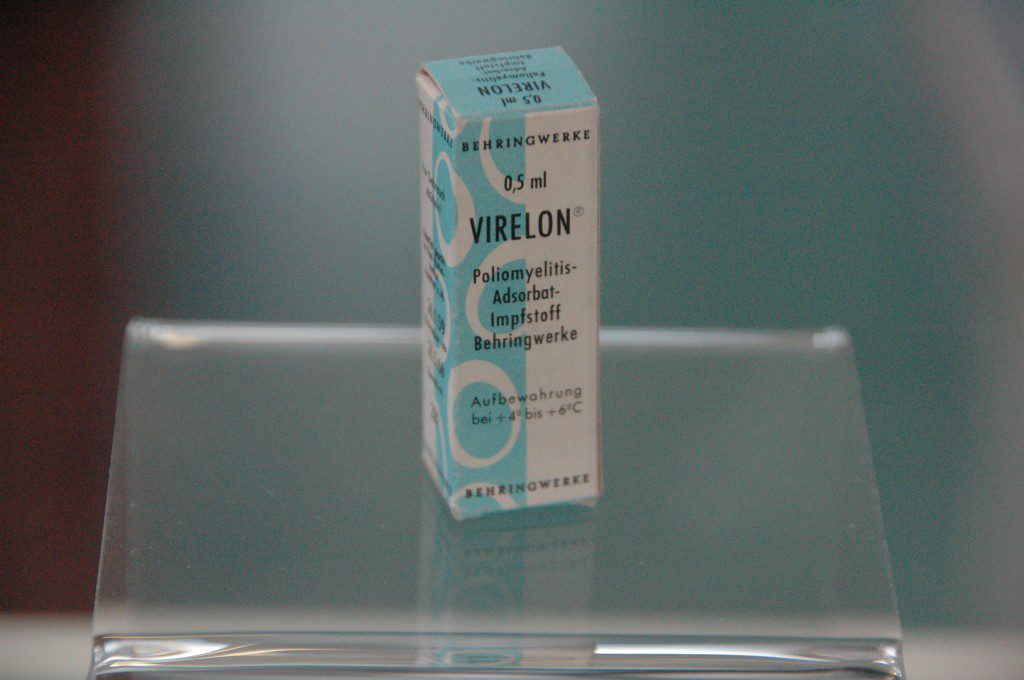 Here is the text associated with the vaccine box:

Â Another excellent exhibit concerned with infectious diseases contained a number of virus-related displays. The first that caught my eye was this collection of small virions hanging from the ceiling. I’d love to have these in the TWiV studio. Behind them you can see a larger than life size model of a cell, which can be entered to view sub cellular components. 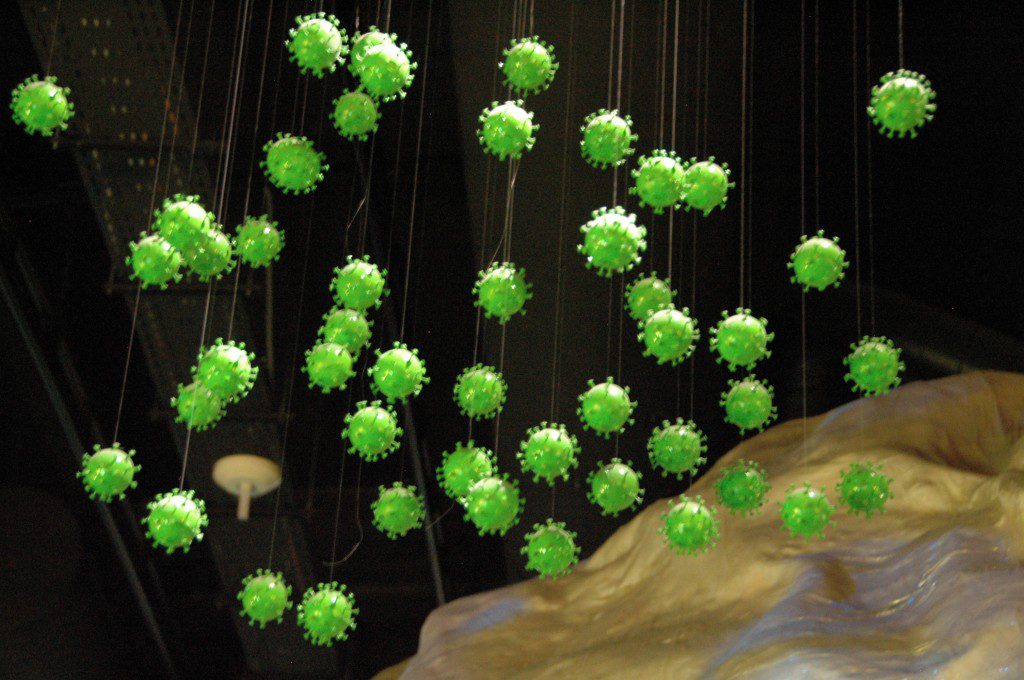 Also part of this display was a large panel entitled ‘What exactly are viruses’? The large, colorful images of herpesvirions at the right contain a viewport through which electron micrographs of other viruses can be observed. 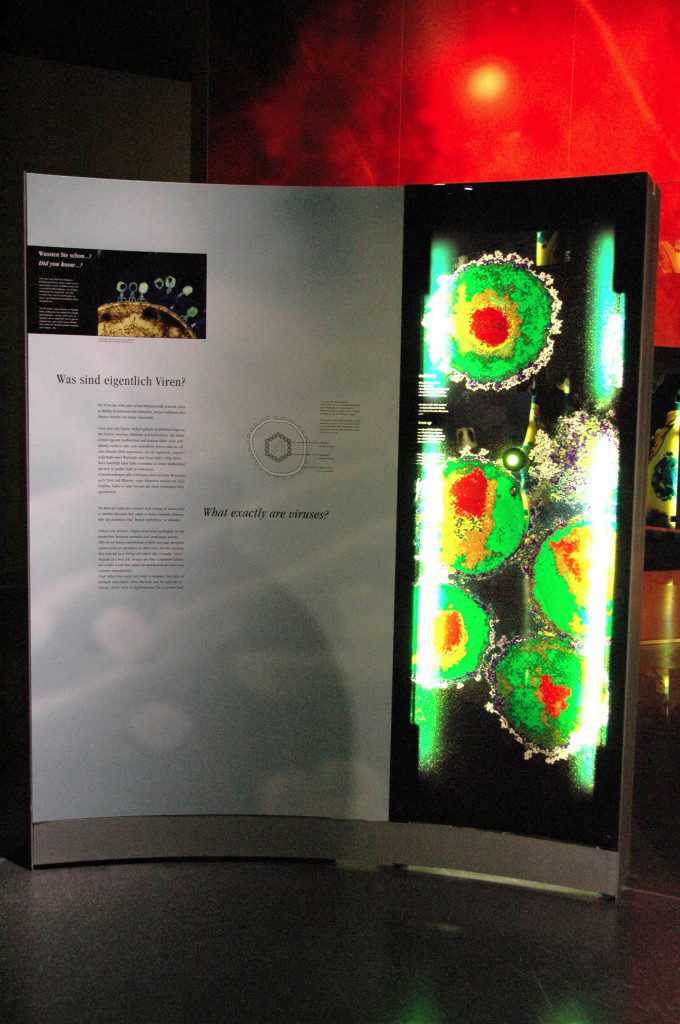 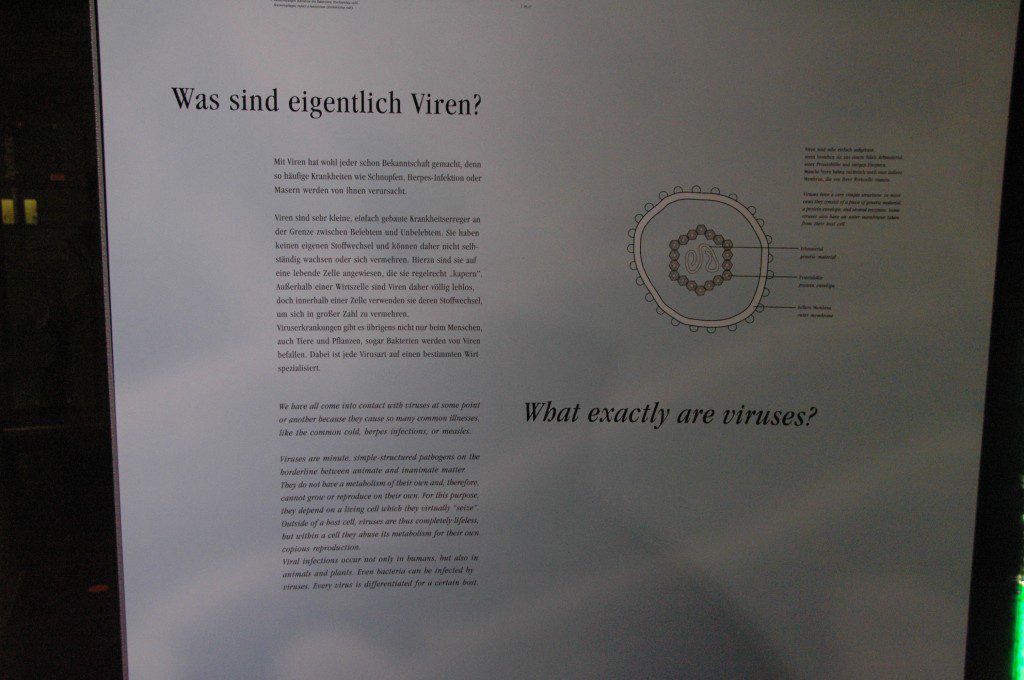 I was pleased to see a section indicating that ‘not all viruses cause diseases in humans’. 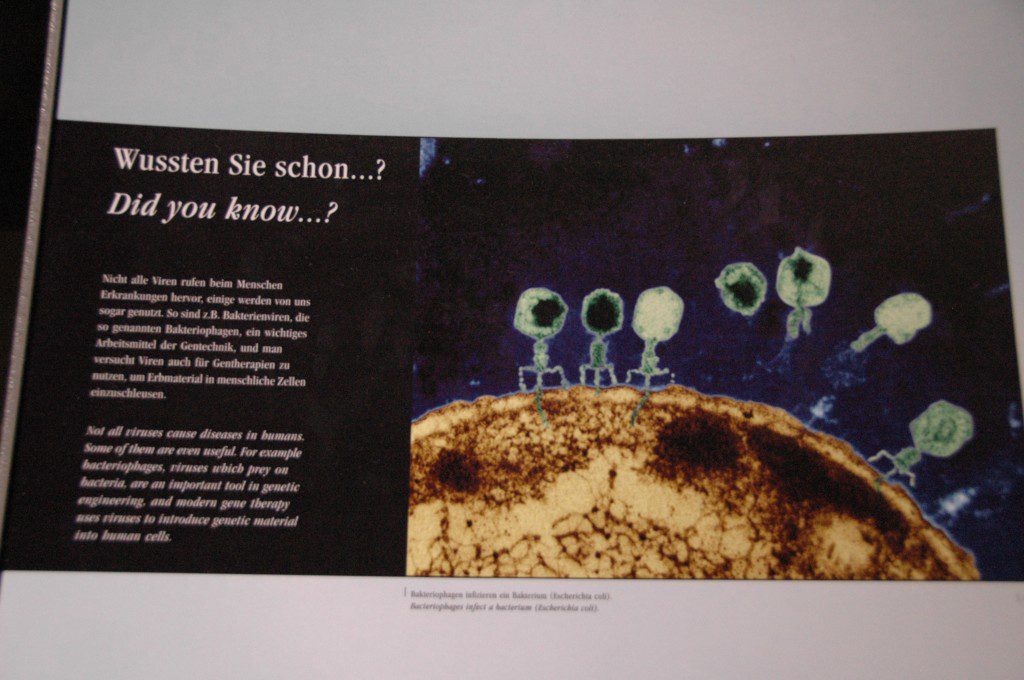 Â Another part of this exhibit discussed antiviral drugs. Elsewhere was an actual robot used to conduct antiviral screens. 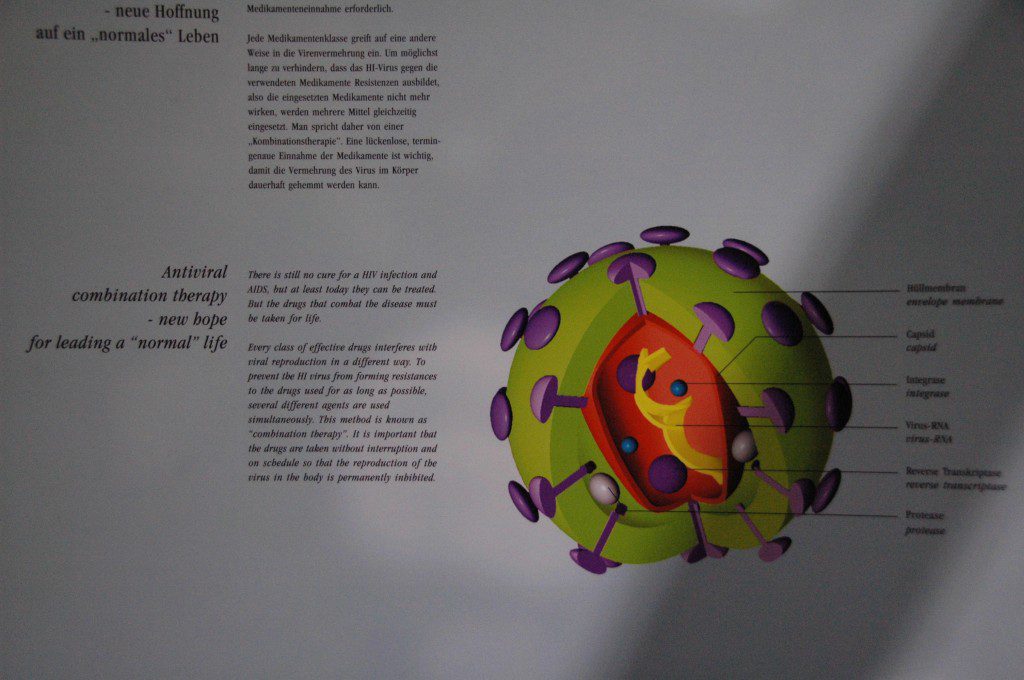 There was also a very large biotechnology exhibit which I did not have time to visit. It included a display by Amgen on artificial bone growth, and a DNA laboratory which among other things explained how sequencing works. It’s truly one of the best museums I’ve ever visited, and spending one day there was not enough: you could easily immerse in the exhibits for a week. This is the kind of museum the world needs, which preserves the history of progress in science and technology. And the virology is reasonably well done. Congratulations, Munich!