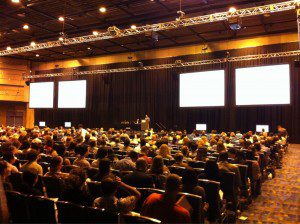 Last week I attended the 30th annual meeting of the American Society for Virology in Minneapolis, Minnesota. During the morning symposia, which consist of formal 35-minute talks, I decided to post ongoing summaries of each talk on Twitter, a process known as ‘live tweeting’ or ‘live blogging’. Some individuals were skeptical about this activity, because many of the speakers presented unpublished data which they might not want circulated. I continued to live tweet the rest of the meeting, but wondered about the future of this practice.

Live blogging is often done at tech conferences (MacWorld Expo, South by Southwest, to name just two). My efforts at the ASV meeting were inspired by Jonathan Eisen, a microbiologist who frequently live blogs from a variety of scientific presentations, such as the American Society for Microbiology annual meeting, small conferences, and seminars.

Shortly after I began live tweeting the ASV meeting (you can find the stream onÂ Twitter by searching for the hashtag #asv11) one of the speakers asked me if I was ‘broadcasting’ the conference. She had mentioned unpublished data in her talk and was concerned that it would now be ‘public’. Later another conference attendee voiced similar concerns. In particular, she asked whether I had permission to live blog. I did not, and I did not find guidelines about dissemination of information at the conference website. I asked Jonathan Eisen for his thoughts on the issue of live coverage of scientific meetings:

Generally I am usually pretty careful to try and not post details about unpublished work without permission. Sometimes it is hard to tell what is published or unpublished but if people specifically say “this is unpublished” then I avoid it and if they say “published” or give a citation, then I feel fine.

It is a fine line … mostly I feel that people like to see general details on twitter and thus even published stuff is useful to post.

As Jonathan writes, it’s often not possible to determine which information given in a talk is published or not. Even restricting the blogging to ‘general details’ can be problematic if these include unpublished information.

One conclusion that I reached while thinking about this issue is that meeting organizers need to have a policy in place to regulate live blogging. Reaching such a policy decision will require discussion among meeting organizers and participants. A recent article on this topic in PLoS Computational Biology summarized the issues:

…live blogging does not change what information is broadcast from a conference, merely how fast it is propagated. […]Â Organizers and scientists alike gain from embracing social networking applications, which now support an unprecedented timeliness and level of visibility for both social aspects of the conference and the knowledge presented there. Conferences where information is intended to be public should embrace this timeliness as an amplifier. Other conferences may be better served by more restrictive policies, although presenters should always have the ability to make their presentation public. Whatever decision is made by conference organizers, a clear policy regarding publication of presented information should be advertised. Organizers, attendees, presenters, and journalists all require clear and equitable guidelines. By following the suggestions presented here, conference organizers can shape their policies quickly and simply, and bloggers can provide a useful, timely record of a scientific meeting.

I would be interested to hear your opinions on live blogging at scientific conferences. Have you ever done it? Was it permitted by the meeting organizers? If not, did they object? Moving forward, should guidelines for this activity be clearly stated in the meeting materials?