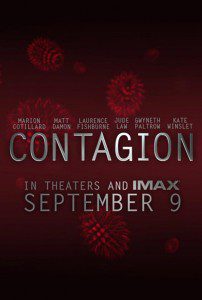 Contagion is the name of a new action-thriller movie about a global outbreak of a deadly viral disease. The trailer is now available. From the website:

“Contagion” follows the rapid progress of a lethal airborne virus that kills within days. As the fast-moving epidemic grows, the worldwide medical community races to find a cure and control the panic that spreads faster than the virus itself. At the same time, ordinary people struggle to survive in a society coming apart.

I hope they get the science right. We’ll see when it opens on 9 September 2011.