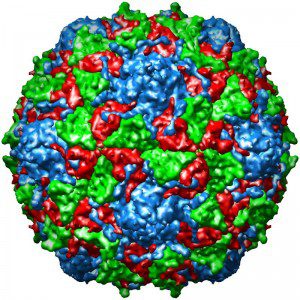 Analysis of poliovirus recovered from the stool of a patient with fatal poliomyelitis revealed that she had been infected with the virus 12 years earlier, probably when one of her children received the oral poliovirus vaccine. This case has the longest known incubation period for vaccine-derived poliomyelitis, and highlights our still rudimentary understanding of how poliovirus causes disease.

The patient in this case, a 44 year old woman from Minnesota, had been diagnosed with common variable immunodeficiency (CVI) in 1991.Â  Patients with this disease lack B lymphocytes and therefore cannot produce antibodies that help control microbial infections. For example, individuals with CVI often develop chronic enterovirus infections. Furthermore, after receiving oral poliovirus vaccine, CVI patients may shed infectious virus for long periods of time, often in the absence of clinical disease. To help control infections, CVI patients are regularly given pooled immune globulin harvested from healthy individuals.

The patientâ€™s first symptoms were cough, runny nose, malaise, and low grade fever, which resolved in 4 days. Two days later she experienced leg cramps which lead to leg weakness, a fall, and hospitalization. The weakness spread to the upper extremities and involved severe muscular pain. Respiratory failure developed and the patient died after 92 days of hospitalization. The initial mild disease, followed by neurological symptoms, is a classic course of poliomyelitis.

If we assume that the patient excreted poliovirus for 11-13 years (it is formally possible that the patient recently acquired vaccine-derived poliovirus from other sources), then an interesting question is why neurological disease took so long to develop. The answer is unknown, but may be related to the fact that in healthy persons, paralytic disease only occurs in 1% of infected individuals. Why most poliovirus-infected individuals do not develop neurological disease remains a mystery. The results of experiments in a mouse model for poliomyelitis have provided some clues. In mice, poliovirus invasion of the nervous system is limited by a strong innate immune response – the production of interferons – in non-neural tissues. In addition, viral invasion of the nervous system is dependent on transport along axons, which is an extremely inefficient process. Whether the same factors limit poliovirus invasion of the human central nervous system is not known.

Another unanswered question is why the patient was not protected by the pooled immune globulin which she received every three weeks. These preparations are tested to ensure that they contain a minimum titer of antibodies against polioviruses. It is possible that the amount of antibody needed to protect individuals with a chronic and acute poliovirus infection are different. Nevertheless, the administration of pooled immune globulin apparently failed to prevent the initial infection, the chronic infection, and paralytic disease.

This case emphasizes the need to continue research on poliovirus. Our knowledge of how the virus causes disease is still rudimentary – as is evident by our failure to understand the 12 year incubation period of the case described here. Although the polio eradication campaign has had excellent results, it can be compromised by vaccine-associated disease. Individuals with B lymphocyte deficiencies will be a reservoir for the virus and can lead to infections if immunization levels drop. It would be highly beneficial to identify all individuals with chronic poliovirus infections, and treat them with antivirals. Unfortunately, such compounds do not exist – underscoring the need to continue research to identify drugs that can be used to treat poliovirus infection.