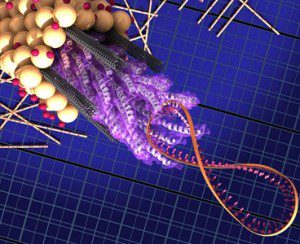 A team at MIT has been able to use a genetically engineered virus to help build carbon nanotubes, microscopic cylinders that are integral in constructing high-efficiency solar cells. These nanotubes had proven difficult to construct due to their small size, and traditional techniques were doing a poor job. However, a virus that was custom made for the job was able to build the nanotubes relatively easy and with a significantly higher level of efficiency and is a promising new technology for the environmental industry.

Angela Belcher, a researcher of Biological Engineering at MIT, believes that viruses can help us build a smarter and better future. She was inspired by the discovery of an abalone shell on the beach one day. She admired how such a complex and beautiful structure could be fashioned out of millions of interactions at the nano-level, all done at standard temperature and pressure without the use of any toxins or harmful chemicals, and wondered why the same biological processes could not be used to build any number of complex materials.

Her team began to focus on the production of solar cells, and particularly on the construction of single-walled carbon nanotubes (SWNT), which is a microscopic component in a solar cell that can provide a high-level of electron diffusion without impacting any other design parameters. However the construction of SWNTs has been limited by the difficulty involved in making such a tiny component and in preventing the tubes from â€˜bundlingâ€™ together. Previous chemical methods have lead to deterioration and caused other negative effects and were unable to show any increase in photocell efficiency.

The research team found that a virus would be the perfect vehicle for overcoming these obstacles. They used the virus M13 as a facilitator to â€˜buildâ€™ the SWNT pathway. M13 is a very small ssDNA bacteriophage that is relatively simple to genetically engineer, and by making a recombinant M13 that would bind the SWNTs, they developed a nano-sized hardworking middleman who would bind the SWNTs and arrange them on the surface, but also keep them spaced out enough so that they wonâ€™t bundle with each other.

Viruses can be a powerful tool in biological engineering because of their incredible ability to replicate, in the proper conditions, quickly and efficiently. Viruses such as M13 are also relatively easy to genetically engineer. The team was able to utilize the M13 virus by genetically engineering, and then selecting for, a virus that expressed the particular peptide chains on the surface that would complement the SWNTs and bind them to the surface. In this way, each virus would grab about 10-12 SWNTs and hold them on the surface. The virus was also modified to express titanium dioxide (TiO2) on the surface which allowed the SWNTs and the TiO2 to come into close contact with each other and fuse. The virusâ€™s role in fusing the SWNTs and the TiO2 is considered to be the big reason for the gain in efficiency. Prior processes had been unable to find a way to develop a strong contact between the two, so the viral role was critical.

For more information on the experiment, check out the MIT article. For a broader talk about the work, listen to Dr. Belcher speak at TED about the powerful new ways that viruses can be used to make cleaner, better materials.