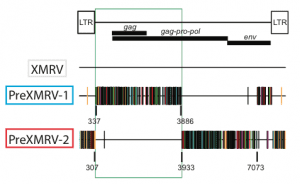 The novel human retrovirus XMRV has been associated with prostate cancer and chronic fatigue syndrome. The nucleotide sequence of XMRV isolated from humans indicates that the virus is nearly identical with XMRV produced from a human prostate tumor cell line called 22Rv1. This cell line was derived by passage of human prostate tumor tissue in nude mice. Sequence analyses reveal that the genomes of these mouse strains contain two different proviral DNAs related to XMRV. These viral genomes recombined to produce XMRV that has been isolated from humans.

XMRV was originally isolated from a human prostate cancer in 2006, and subsequently associated with ME/CFS. The human cell line 22Rv1, which was established from a human prostate tumor (CWR22), produces infectious XMRV. An important question is whether XMRV was present in the original prostate tumor, or was obtained by passage through nude mice. To answer this question, DNA from various passages of the prostate tumor in nude mice (called xenografts), and the mouse strains used to passage the tumor, were analyzed for the presence of XMRV proviral DNA.

Early-passage xenografts did not contain XMRV, but mouse cells found in them did contain two related proviruses called PreXMRV-1 and PreXMRV-2. The 3â€™-3211 nucleotides of PreXMRV-1, and both LTRs, are identical to XMRV save for two nucleotide differences. The genomic 5â€™-half of XMRV and PreXMRV-1 differs by 9-10%. PreXMRV-1 is defective for replication due to mutations in genes encoding the gag and pol proteins. PreXMRV-2 does not contain obvious mutations that would prevent the production of infectious viruses. The gag-pro-pol and a part of the env region of this viral genome is identical to that of XMRV save for two base differences; the LTRs and the remainder of the genome differ by 6-12% from XMRV.

The nude mice used for passage of the original prostate tumor were likely the NU/NU and Hsd strains. Neither mouse strain contains XMRV proviral DNA, but both contain PreXMRV-1 and PreXMRV-2 proviral DNA.

These data demonstrate that XMRV was not present in the original CWR22 prostate tumor, but arose by recombination of PreXMRV-1 and PreXMRV-2 between 1993-1996. When the original prostate tumor was implanted into nude mice, some of the mice harbored both pre-XMRV-1 and âˆ’2 endogenous proviruses, which recombined to form XMRV. The authors believe that XMRV originating from the CRWR22 xenografts, the22Rv1 cell line, or other related cell lines has contaminated all human samples positive for the virus. In addition, they suggest that PCR assays for XMRV may actually detect PreXMRV-1 and âˆ’2 or other endogenous viral DNA from contaminating mouse DNA.

Another possibility to explain the origin of XMRV is that it arose in mice and can infect humans. If this is true, then XMRV would have to be present in the nude mice used to passage the CWR22 human prostate tumor. No evidence for an XMRV provirus was found in 12 different nude mouse strains, including two used to passage the CWR22 tumor. Furthermore, a screen of 89 inbred and wild mice failed to reveal the presence of proviral XMRV DNA. Hence the authors conclude:

â€¦that XMRV arose from a recombination event between two endogenous MLVs that took place around 1993-1996 in a nude mouse carrying the CWR22 PC xenograft, and that all of the XMRV isolates reported to date are descended from this one event.

It is possible that XMRV produced during passage of CWR22 in nude mice subsequently infected humans. Because XMRV arose between 1993-1996, this scenario could not explain cases of prostate cancer and chronic fatigue syndrome that arose prior to that date.

How can these findings be reconciled with the published evidence that sera of ME/CFS patients from the 1980s contain antibodies to XMRV? Those antibodies were not shown to be directed specifically against XMRV, and therefore cannot be used to prove that XMRV circulated in humans prior to 1993-96. Furthermore, in the absence of clear isolation of an infectious virus, antibody tests alone have proven highly unreliable for identification of new viruses.

Update: A second paper has also been published in Science Express today entitled “No evidence of murine-like gammaretroviruses in CFS patients previously identified as XMRV-infected”. Editors of the journal Science have asked the authors to retract their 2009 paper linking XMRV infection with chronic fatigue syndrome. The authors have refused.