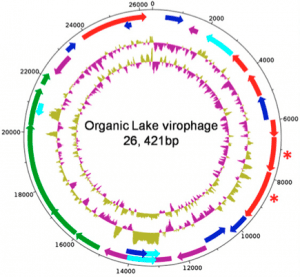 Last week we discussed the second known virophage, but we didn’t have any explanation of why such viruses might evolve. This week we have the discovery of a third virophage, hints of many more, and a hypothesis for what they might be doing in the global ecosystem.

The newest virus eater is called Organic Lake virophage (OLV), for the body of water in Antarctica where it was identified.Â Antarctic Lakes are well suited for metagenomic analysesÂ (nucleotide sequences produced from environmental samples) because they are dominated by microbes and typically sustain few multicellular eukaryotes. For example, a metagenomic study of Lake Limnopolar, another Antarctic lake, revealed many novel eukaryotic and ssDNA viruses.Nucleotide sequence analysis of water samples taken from Organic Lake in 2006 and 2008 revealed the presence of three abundant phycodnaviruses. These are large, dsDNA-containing viruses that infect algae. Among the sequences was a novel virophage, called Organic Lake virophage (OLV), related to Sputnik virophage, but with a larger circular dsDNA genome (26,421 bp, pictured). OLV was found in water samples taken two years apart, indicating that it is a stable part of the Organic Lake ecosystem.

Because phycodnaviruses are related to mimivirus, it is assumed that OLV replicates in phycodnavirus-infected cells and inhibits the viral production. However, an experiment to test this relationship was not done. Six of the OLV genes are related to genes found in the lake phycodnaviruses, suggesting that gene exchange between virus and virophage has occurred, likely during co-infection of the same host.

When the Sputnik virophage infects mimivirus-infected amoebae, the yield of the larger virus is decreased by 70%, and there is also a threefold inhibition of virus-induced cell lysis. The authors speculated that the Organic Lake virophage could therefore influence the composition of the microbial community. To test this idea, they conducted mathematical modeling of the effect of virophage on a population of microbes that is infected with a lytic virus. Without the virophage, there are cycles of virus reproduction, cell death, and cell growth (blooms). The effect of adding OLV to the equation is that the frequency of blooms increases.Â The authors suggest that the virophage has this effect by reducing mortality of the host algal cell caused by phycodnaviruses. Antarctic lakes have long cycles of daylight and darkness, and a decrease in phycodnavirus cell killing caused by virophages may be essential for maintaining stability of the microbial food web.

This hypothesis makes perfect sense, and would explain why virophages evolved, but it is based in part on data on how Sputnik virophage interferes with mimivirus. It will be necessary to confirm that OLV indeed inhibits the replication of phycodnaviruses. Furthermore, proving that OLV affects microbial communities in lakes will require extensive field studies.

Perhaps even more interesting than the notion that virophages may engineer ecosystems is finding them in a broader range of environments. Virophage sequences were found in water samples from nearby Ace Lake, and a search of the Global Ocean Survey database revealed virophage sequences inÂ a hypersalineÂ lagoon and an ocean upwelling in the Galapagos islands, aÂ Delaware Bay estuary in New Jersey, and a freshwater lake in Panama.

It is well known that cell killing by viruses has a major impact on ocean ecology. By regulating virus-induced cell lysis, virophages might also have a major effect on aquatic ecology. This possibility makes me wonder if there are virophages of animal viruses that might regulate viral pathogenesis.