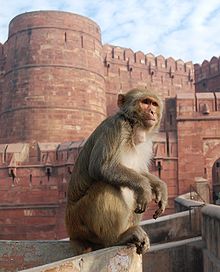 The subject of this study, the Rhesus macaque (Macaca mulatta), was selected because of its evolutionary proximity to humans and a comparable immune system. The monkeys used did not have antibodies to the capsid protein p30 of XMRV, indicating that they were not previously infected.Â Animals were inoculated intravenously with 3.6 million TCID50 of purified XMRV – a good amount of virus, to ensure infection. The virus used, VP62, was produced by transfecting cells with cloned viral DNA isolated from human prostate.

Virus in the plasma fraction of blood was assayed by quantitative RT-PCR. Of three animals infected, virus was detected in one animal at day 4 and not after day 14; and in a second animal from days 14-20. The third animal did not develop detectable viremia. Proviral DNA was found in peripheral blood mononuclear cells (PBMC) of all three monkeys for 3-4 weeks, indicating successful infection. At one month post-infection proviral DNA was no longer detected. Plasma virus was again detected in one of the positive animals on day 291, 16 days after being immunized with a mixture of XMRV proteins. This means that viral DNA had been present in this animal but was not detected.Â XMRV was detected in CD4+ and CD8+ T cells and NK cells, but not in B cells or monocytes.