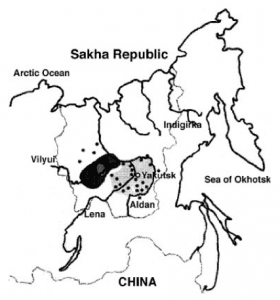 A type of human encephalitis – an infection of the brain – has been known to affect the indigenous people living in the Sakha Republic of Russia since the mid-1800s. The available clinical and epidemiological evidence suggests that the disease is caused by a pathogen, but proving this has been difficult.

The disease is called Vilyuisk encephalitis (VE) due to its prevalence in the Vilyui River Valley. After an outbreak of VE in the 1950s, when 1% of the local population was affected, clinical aspects of the disease were carefully documented by the Russian health ministry. VE is a progressive neurological disorder with acute, subacute, and chronic presentations. Acute disease begins with fever, chills, headache, vomiting and rapid progression to confusion, quadraparesis and death within a few months, with 15% mortality. Subactue VE begins in a similar manner, followed by remission, and then the return of neurological symptoms including spastic paralysis and dementia. The mean duration of illness of 3.5 years. Chronic VE is a long-term form of subacute VE with no acute phase.

It is not known how VE is transmitted among the indigenous Sakha. Most live in wooden huts with no sanitary facilities; running water is available only after the spring thaw (May – August) when the snows melt. Why the onset of VE coincides with the subsequent increase in outdoor activities such as fishing, hunting, and herding cattle, is not understood.

The Sakha Republic is located north of the trans-Siberian railway and several degrees south of the Arctic circle. It is a harsh environment where winter temperatures are âˆ’40 degrees F, and there are no roads or railways allowing travel to the rest of Russia. These conditions may in part explain why the disease has not spread extensively. In the 1980s the disease moved south as the indigenous people migrated towards the regional capital of Yakutsk, where VE had never been observed.

Attempts to identify a viral etiology of VE were carried out in Moscow in 1954-57 by inoculating blood, stool, nasopharyngeal, cerebrospinal fluid and brain samples from VE patients into mice. Eleven virus isolates were obtained, and one, now called Vilyuisk human encephalitis virus (VHEV), which originated from CSF, has been the most studied. Sequence analyses have revealed that VHEV is related to Theilerâ€™s murine encephalomyelitis virus (TMEV), a member of the picornavirus family that also includes poliovirus. TMEV is a natural pathogen of mice, in which it causes a persistent infection of the central nervous system. This property of TMEV was consistent with the pathogenesis of VE in humans. However, VHEV has not been identified in any other patient with VE, and may be a laboratory contaminant that originated from the mice used to isolate the virus.

More recently, Theiler-like viruses have been isolated from humans. The first, called Saffold virus (SAFV), was isolated in 1981 from an 8 month old infant with fever of undetermined origin. The second was isolated 25 years later from the nasopharynx of a 23 month old infant. Subsequent epidemiological studies have revealed that SAFV-like viruses are ubiquitous human viruses that infect during early childhood. These findings suggest that VHEV is a human virus, and not a laboratory contaminant. Whether VHEV causes Vilyuisk encephalitis remains to be determined.

There has been little progress in research on VE, mainly as a consequence of the remote location of the Sakha Republic, and the decline in resources for VE surveillance. If these obstacles could be overcome, here are some of the important questions about the disease that should be answered:

Some of these questions are being addressed by neurologist Howard L. Lipton in work supported by the US National Institutes of Health.