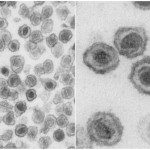 A strong argument that the novel human retrovirus XMRV is not a laboratory contaminant is the finding that viral DNA is integrated in chromosomal DNA of prostate tumors. Why does this result constitute such strong proof of viral infection?

Establishment of an integrated copy of the viral genome – the provirus – is a critical step inÂ the life cycle of retroviruses. Proviral DNA is transcribed by cellular RNAÂ polymerase II to produce the viral RNA genome and theÂ mRNAs required to complete the replication cycle. Without proviral DNA, retroviral replication cannot proceed.

To produce proviral DNA, the retroviral RNA genome is converted to a double-stranded DNA by the viral enzyme reverse transcriptase. This step occurs in the cytoplasm. Speciï¬c and efï¬cient insertion ofÂ the viral DNA into the host cell DNA is catalyzed by a viral enzyme called integrase. This enzyme recognizes and nicks the two ends of viral DNA, and the new 3′-endsÂ are then joined covalently to the host DNA at staggered nicks made by integrase.

The image below shows some of the characteristic features of retroviral integration. A the top is the unintegrated linear DNA of avian sarcoma/leukosis virus produced by reverse transcription. Upon completion of integration, two base pairs (AAâ€¢TT) are lost from both termini, and a 6-bp target site in host DNA (pink)Â is duplicated on either side of the proviral DNA. This target site varies in length from 4 to 6 bp among different retroviruses.Â The proviral DNA (middle) ends with the conserved 5â€²-T Gâ€¦C A-3â€² sequence. The provirus serves as a template for the production of theÂ viral RNA genome (bottom).

To identify XMRV proviral DNA, genomic DNA was isolated from prostate tumors, and DNA was amplified using a primer that annealed in the viral env gene, near the right-hand LTR. Nucleotide sequence analyses of amplified DNAs from 9 different patients showed the expected viral CA sequence followed by human DNA. However, the other cardinal sign of retroviral integration – duplication of host DNA sequences flanking the integration site – could not be confirmed, because only the right-hand integration site was studied.

The isolation of the entire proviral DNA, including both flanking integration sites, from patients with prostate cancer or chronic fatigue syndrome would be additional evidence that XMRV is a virus that infects humans.