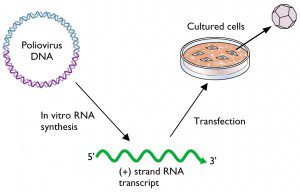 On my recent trip to record TWiV #111 at Florida Gulf Coast University, I visited Rich Condit in Gainesville. There he told me a story about how the bacteriophage T7 polymerase/promoter system was developed. It’s an interesting tale that demonstrates how important scientific advances often have convoluted roots. You can watch the video below or download a high-definition (720p) version (585 MB .mov).

The combination of bacteriophage T7 RNA polymerase and its cognate promoter sequence allows the production of specific RNAs either in vitro or in cells. In manyÂ laboratoriesÂ this system is used to synthesize infectious viral RNA from cloned DNAs. In the example shown, a DNA copy of of the poliovirus RNA genome has been cloned into a bacterial plasmid. The promoter sequence for T7 RNA polymerase is inserted at the 5′-end of the viral sequence (not shown). When placed within any double-stranded DNA, this 19 nucleotide promoter sequence (TAATAGGACTCACTATAGG) will lead to the production of RNA. The plasmid is incubated with purified T7 RNA polymerase (commercially available) and ATP, GTP, UTP and CTP, and the viral RNAs that are produced are then transfected into cells. A viral replication cycle begins, resulting in the production of infectious virus particles.

As described by Rich in the video below, this expression system was conceived by Ed Niles and brought to practice by Bernard Moss. The first paper published described the insertion of the gene encoding T7 RNA polymerase into the genome of vaccinia virus. When cells are infected with the recombinant virus, they produce T7 RNA polymerase. To express a protein using this system, a gene is cloned into a plasmid next to the T7 RNA polymerase promoter. When this plasmid is introduced into cells producing T7 RNA polymerase, RNAs are made which are then translated into protein.

This method was subsequently modified by Wimmer and colleagues to synthesize infectious poliovirus RNA in vitro.