Influenza researcher Peter Palese visited yesterday and spoke about “Pandemic influenza: Past and Future”. A key part of his talk was a review of his efforts to produce a universal influenza vaccine which protects against all strains. He used the following graph to make the point that when influenza pandemic strains emerge, there is insufficient time to deliver a vaccine using current technology. 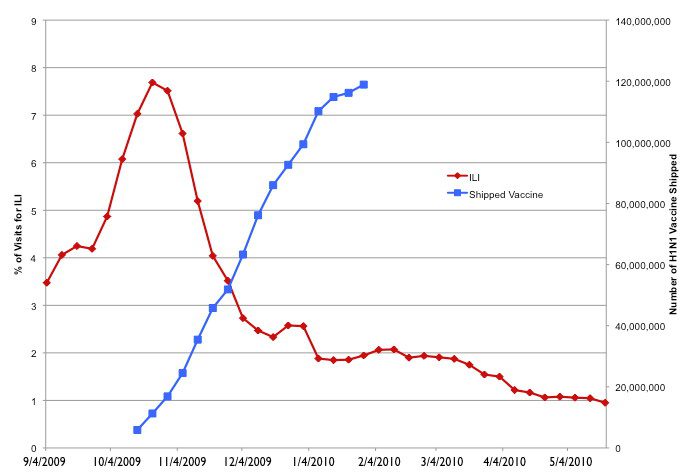 The graph depicts the percentage of visits for influenza-like illness (ILI – the red line) and distribution of the swine-origin influenza vaccine (blue line) from September 2009 to May 2010 in the US. At the peak of ILI at the end of October 2009, fewer than 20 million doses of vaccine had been shipped. By the time 120 million doses had been distributed, infections with the new H1N1 strain had subsided. Dr. Palese believes that immunization was too late to have a substantial impact on this second wave of influenza. The inability to immunize the population in time to prevent influenza was conceded by the Centers for Disease Control and Prevention in October 2009.

Dr. Palese’s solution to this dilemma is to deploy universal vaccines which would protect against any influenza strain, including future pandemic viruses. He and others have already made impressive progress towards this goal.

The head of Columbia’s Environmental Health & Safety division pointed out to Dr. Palese that despite being delivered too late to prevent the second wave of influenza, the vaccine would be expected to reduce influenza during the 2010-2011 season in the US.

An interesting question is whether the additional cost of rushing production and development of the vaccine in 2009 was a worthwhile expenditure. In hindsight it would appear that the answer is no. But had the fall wave of influenza peaked later – December or January, for example – the vaccine might have been more effective in preventing infections. That’s why we’ll have to do the same when the next pandemic strain emerges – unless by then we have a universal influenza vaccine.