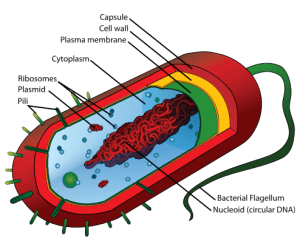 “Regarding your discussion of the term prokaryote in TWiV #93, I want to pipe in as a combatant in the â€œP wordâ€ wars. I am firmly in the camp of the users of the term. Although the term has carried a phylogenetic burden, meaning that it originally implied a close evolutionary relationship between the Bacteria and the Archaea, no one I know uses it in that sense now. Among biologists, the three domains model is widely accepted, in fact, not even discussed. Itâ€™s true that there are leftover people who think that the prokaryote/eukaryote divide denotes a single evolutionary cleft, but thatâ€™s simply because any concept of science takes time to filter out.

“I maintain that the term, used in a broad sense, is extraordinarily useful. In a college textbook I co-authored called â€œMicrobeâ€, we used the P word some 300 times. How come? Had we not used it, we would have had to say â€œBacteria and Archaeaâ€ that many times (and being parsimonious of verbiage, we eschewed that). This usage illustrates the reality that these two groups of microbes, though they likely diverged very early on in evolution, share a large number of common properties. Their sizes tend to overlap, their overall body plan is generally very similar, they often occupy the same habitats, they share many homologous genes. Presented with an EM thin section, you could not tell a typical bacterium from a typical archaeon. So, dissimilar as they may be in one sense, they are very similar in a number of important attributes. Saying â€œprokaryotesâ€ is much like saying â€œanimalsâ€ or â€œplants,â€ large groups that are extremely heterogeneous and that diverged a long time ago (although certainly not as far back as the prokaryotes and eukaryotes). I agree, there is danger in the P word being misunderstood out in the big wide world, but there is none within the family of biologists.

“There is a more serious issue. Making phylogeny the overarching master of relatedness is readily justified if one thinks in these terms only. But isnâ€™t ecology just as important to understand biological behavior and relatedness? There is a tyranny to phylogeny, which demands that you view the world of living things in terms of where they came from, not what they are doing now.”

The discovery of unique viruses infecting archaea also corroborates the three domains concept from the virus perspective. Indeed, most viruses infecting archaea have nothing in common with those infecting bacteria, although they are still considered as â€œbacteriophagesâ€ by many virologists…David Prangishvili and myself have thus suggested to classify viruses into three categories, archaeoviruses, bacterioviruses and eukaryoviruses.