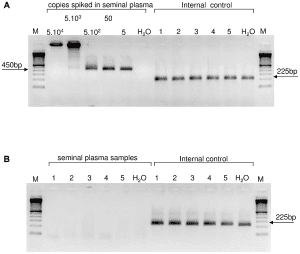 How XMRV, the new human retrovirus associated with prostate cancer and chronic fatigue syndrome, might be transmitted among humans is unknown. The finding that the virus can be detected in prostate cancer cells, and in prostatic secretions of men with prostate cancer suggests that it could be sexually transmitted. To address this question, the presence of XMRV in seminal plasma of men with HIV-1 was examined. Although the virus was not detected in 93 samples from 54 HIV-1 infected men, the study provides little information on possible transmission mechanisms of XMRV.

This study involved two groups of HIV-1 infected men from the Netherlands: 29 who have sex with men, and 25 heterosexual men. The rationale for examining HIV-1 infected men for XMRV was that “they have a higher chance of contracting sexually transmitted pathogens than non-HIV-1 infected men”. For 39 men a second sample was also available from another time point, bringing the total samples to 93.

To detect XMRV, semen samples were diluted 1:1 with buffer and centrifuged to remove cells, yielding seminal plasma. Total nucleic acid was then extracted and subjected to reverse-transcription and then polymerase chain reaction. This procedure assays for the presence of XMRV viral RNA. At the same time, the samples were also tested for the presence of HIV-1 RNA. The positive control for XMRV was total nucleic acid extracted from a prostate cancer cell line known to produce viral RNA.

The results show that HIV-1 was detected in 25% of the seminal plasma samples, while none contained XMRV nucleic acid. The authors conclude:

Although HIV-1 was amplified from 25% of the seminal plasma samples, no XMRV was detected, suggesting that either the prevalence of XMRV is very low in The Netherlands, or that XMRV is not naturally present in the seminal plasma.

In my opinion, these conclusions are not supported by the data obtained in this study. Here are my reasons:

To determine if XMRV could be transmitted in semen, I would obtain semen samples from patients known to be infected with the virus. Then I would co-culture total semen and seminal plasma with LNCaP cells to amplify any virus present, followed by PCR to detect either virions or proviral DNA. I realize it may be difficult to conduct the study in this way, but I don’t see the value of doing it any other way.