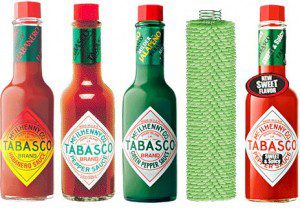 It has been estimated that approximately one hundred trillion bacteria colonize the human intestine. That’s about ten times the number of cells that constitute the entire human body. These bacteria are believed to have a mutualistic symbiotic relationship with their hosts. What is known about the viral communities that inhabit our alimentary tract?

The vast majority of DNA viruses in the human gut are bacteriophages, which infect the resident bacteria. The most plentiful RNA viruses in our feces are plant viruses, and the most abundant is pepper mild mottle virus (PMMV). This plant virus is present at high levels, up toÂ  109 virions per gram. The virus has been identified in 12 of 18 fecal specimens taken from healthy humans in the USA and Singapore.

Pepper mild mottle virus is present worldwide in field-grown peppers. It is composed of an RNA genome wrapped with many copies of a viral protein that forms a rod-like particle with helical symmetry (pictured). The origin of PMMV in human feces is the food that we eat. The virus can be readily detected in fresh peppers, and in food products produced from peppers, such as chili powders, sauces, and spices. High levels of PMMV are found in Tabasco sauce, which contains virions that are not only visible in the electron microscope, but which are infectious for plants.

A case-control study was done to test whether presence of PMMV virus in feces is associated with clinical symptoms. Eighteen adults with PPMV positive feces were compared with 31 control, PPMV-negative individuals. Abdominal pain, diverticulosis or diverticulitis, and fever were significantly associated with the presence of PPMV RNA. The authors conclude:Â  ‘We provide the first evidence that plant viruses may cause disease in humans’. However they admit that ‘clinical symptoms may be imputable to another cofactor, including spicy food’. It’s interesting that 22 of 304 adults, but only 1 of 137 children, were positive for PPMV. The positive child was a 5 year old admitted to hospital because of abdominal pain, fever, asthenia, and hyperventilation. He probably ate too much spicy food, an activity most children don’t engage in.

Could PMMV replicate in human cells? I believe it is highly unlikely. Viruses such as PMMV are transmitted among plants by mechanical means (such as by contaminated farm equipment) and do not enter cells via specific receptors, as do animal viruses. Therefore I see no efficient way for PMMV to enter a human cell. If tomato spotted wilt virus is artificially introduced into HeLa cells, it does not reproduce. However, if the gene encoding the viral RNA polymerase is introduced into HeLa cells along with tomato spotted wilt virus, the viral RNA does undergo replication, although new particles are not produced. These are highly artificial conditions which are unlikely to occur in the human intestine.

The next time you have abdominal cramps after eating spicy food, it’s probably not caused by PMMV, although you will be shedding that virus in your feces. It’s because the chemical constituents of spicy foods affect your digestive tract – in ways that we don’t understand.