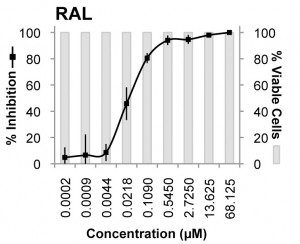 Xenotropic murine leukemia virus related virus (XMRV) has been implicated in prostate cancer and chronic fatigue syndrome (CFS). Because XMRV is a retrovirus, it might be susceptible to antiviral drugs that are licensed for the treatment of AIDS. AZT (azidothymidine) was previously found to block XMRV replication. A screen of forty-five compounds reveals that XMRV replication is inhibited by raltegravir and three other drugs.

The authors studied the effect of 45 compounds on the replication of XMRV in cell lines derived from human breast (MCF-7) and prostate (LNCaP) cancers. Twenty-eight of the drugs have been approved for use in humans, including treatment of HIV-1 infection. The drugs tested include nucleoside and non-nucleoside reverse-transcriptase inhibitors, and integrase and protease inhibitors. Other inhibitors used included aspirin, acylclovir (the anti-herpesvirus drug), and chloroquine (complete list here).

To test the ability of the drugs to inhibit XMRV replication, cells were infected with the virus, and increasing amounts of the compound were added to the cell culture medium. After incubation for six days, the virus in the culture medium was assayed by measuring reverse transcriptase activity. This enzyme, which converts RNA to DNA, is packaged within the viral particle. Its presence in the cell culture medium is therefore a measure of viral production. The cells were also monitored for cytotoxicity to ensure that a reduction in viral release was a consequence of specific antiretroviral activity, not toxicity of the compounds.

The problem of drug resistance during treatment of AIDS was made manageable by using combinations of three antiviral compounds. Pairwise combinations of raltegravir, L-000870812, TDF and ZDV were tested for activity against XMRV in LNCaP cells.The effects were either additive or synergistic. All combinations that included raltegravir showed synergy without cytotoxicity. This observation is good news for treating XMRV infection. Based on the response of other retroviruses to combination therapy, the use of two antiviral drugs might suppress XMRV replication, reduce disease, and reduce emergence of resistant viral mutants.

How well do these drugs inhibit XMRV compared with HIV-1? The authors write that “Relative to HIV-1, the compounds were generally less potent against XMRV than HIV-1, especially at the EC90 level” – the concentration of drug needed to inhibit virus production by 90%. It’s difficult to predict from these data whether the drugs would be effective at effectively reducing XMRV levels in an infected individual. Chemical modification of the compounds could yield drugs that are more active against XMRV.

No matter what antiviral drugs are used, resistant viral variants inevitably emerge. For XMRV the process may be less problematic than for HIV-1. Compared with HIV-1, isolates of XMRV isolates have limited sequence diversity. The genomes of all the XMRV isolates obtained to date differ from each other at 27 out of 8,100 nucleotides. If this lack of diversity is a consequence of limited replication in the host, then the emergence of drug resistant variants could be significantly lower than HIV-1. A combination of two drugs might therefore be effective in treating XMRV infection. The authors note that after several months of propagating XMRV in the presence of raltegravir, drug resistant viruses have not emerged. But a human is very different from a dish of cultured cells.

Whether or not combinations of these drugs can be used to treat XMRV infection awaits the results of additional epidemiological studies, as well as clinical trials to determine efficacy. As the authors conclude:

If XMRV proves to be a causal factor in prostate cancer or CFS, these discoveries may allow for rational design of clinical trials.

Raltegravir has been previously shown to inhibit murine leukemia virus, which is highly related to XMRV. But the drug exacerbates autoimmune disease in mice which might rule out its use in treating CFS.