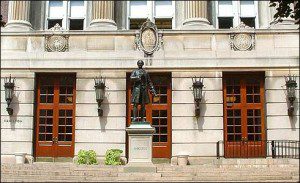 Today my virology class is taking a midterm examination. To prepare for this in-class test, I provided the students with a study guide highlighting what I believe to be the main concepts that they should learn from each lecture.  Once all the students have taken the exam, I’ll post it here for everyone else to take. To prepare for that day, you might want to start by reviewing the first half of the course, which covered the infectious cycle.

P(k) is the fraction of cells infected by k virus particles, m is the moi.

P0= probability of a cell not being infected