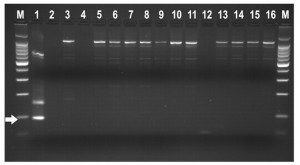 The suggestion that the retrovirus XMRV is the etiologic agent of chronic fatigue syndrome (CFS) arose from a study in which the virus was found in 68 of 101 US patients. The virus was not detected in two independent studies of 186 and 170 CFS patients in the United Kingdom.Â A new Dutch study has also failed to reveal XMRV sequences in 32 CFS patients.

The subjects of the Dutch study wereÂ part of a 298 member cohort. All patients fulfilled the Oxford criteria for CFS and reported debilitating fatigue for at least one year. Cryopreserved peripheral blood cells taken from 32 of these individuals between 1991-92 were used for preparation of DNA. This material was then subjected to polymerase chain reaction to amplify proviral XMRV DNA. The primer sets used were the same as those employed in the US study. Under the PCR conditions used, at least 10 copies of XMRV sequences could be detected per 100,000 peripheral blood mononuclear cells. All samples from CFS patients and from controls were negative for two different XMRV genes encoding integrase and gag proteins.

The authors consider a number of reasons why their results differ from those in the initial US CFS study. They rule out (1) technical differences; (2) The possibility that the long duration of CFS in the Dutch cohort may have led to negative results, because retroviruses integrate into the genome of the host; (3) cryopreservation; and (4) differences in cohorts. They suggest that XMRV might be involved in CFS outbreaks but not in sporadic CFS:

The authors do acknowledge the small sample size used in their study, which prevents them from statistically ruling out a role for XMRV in CFS. Nevertheless they conclude that “our data cast doubt on the claim that this virus is associated with chronic fatigue syndrome in the majority of patients.”

My office neighbor here at Columbia University Medical Center is Dr. Stephen Goff, an expert on retroviruses who has begun to investigate XMRV in his laboratory. He recently gave a plenary lecture on XMRV at the Conference on Retroviruses and Opportunistic Infections in San Francisco; you can hear some of his comments at medpage today. I poked my head in his office yesterday and asked him what he thought of the story so far. His answer: everyone needs to exchange samples, and they are not doing it. I couldn’t agree more.