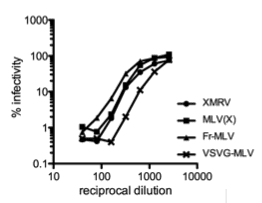 A new retrovirus, xenotropic murine leukaemia virus-related virus (XMRV), first identified in tumor tissue of individuals with prostate cancer, was subsequently found in 68 of 101 US patients with chronic fatigue syndrome (CFS). XMRV was not detected in blood samples of 186 confirmed CFS patients in the United Kingdom. A second independent study in the UK (pdf) has also failed to reveal XMRV in CFS patients.

The subjects of this study were confirmed CFS patients from St Georgeâ€™s University of London, Barts and the London Hospital Trust, and Glasgow Caledonian University. A total of 170 serum samples from CFS patients and 395 controls were used. A polymerase chain reaction assay was devised that could detect as little as 16 copies of proviral XMRV DNA (viral DNA integrated into human chromosomal DNA). No XMRV sequences were detected in 142 CFS samples and 157 controls.

A second method was then used to search for evidence of XMRV: the patient serum samples were examined for the presence of antibodies that could block infection of cells with the virus. Cells were infected with XMRV in the presence of serum from CFS patients or control patients. Included were sera known to block XMRV infection to ensure that the assay functioned normally. None of 142 CFS samples contained antibodies that could block XMRV infection of cells. In contrast, 22 samples out of 157 controls (14%) were identified that contained neutralizing activity. One of 28 CFS serum samples from a separate cohort was found to contain XMRV neutralizing activity; none of the 12 control sera could block XMRV infection.

These results could be interpreted to mean that XMRV infection occurs in the general population, confirming the observations of the first US study. However, the sera from the second UK study also blocked the infectivity of viruses other than XMRV, including those containing envelope proteins from vesicular stomatitis virus. The authors believe that the neutralizing activity in the control sera is not specific for XMRV. These antibodies were probably induced by infection with another virus.

The results obtained with these samples do not provide evidence for an association of XMRV infection and CFS. This does not eliminate a role for XMRV in CFS. As the authors write:

The publication of these results has promoted much discussion and controversy amongst CFS researchers and patients alike, and has highlighted the need for additional investigations in this area.Â Following the findings reported here, it would seem a prudent next step for subsequent studies to compare samples and protocols between different laboratories around the world.

It’s time to put aside arguments over the competence of laboratories to carry out polymerase chain reaction and work towards understanding the role of XMRV in human disease. The three laboratories who have published their findings on XMRV in humans should exchange their samples to confirm the findings. Compelling answers will only come from far more extensive global studies of the prevalence of XMRV in CFS and control populations are clearly needed.