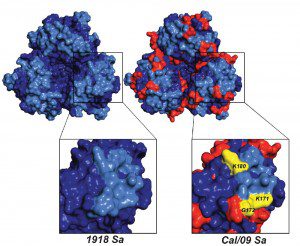 Influenza A viruses typically cause severe respiratory disease mainly in the very young or the elderly. The 2009 swine-origin H1N1 virus is unusual because it preferentially infects individuals under 35 years of age. We’ve previously noted that being olderÂ is a good defense against 2009 H1N1 influenza virus, in part because older people have antibodies that block infection. Experiments done in mice show that immunization with 1918-like or classical H1N1 swine influenza viruses protects against infection with 2009 H1N1 virus.

When mice are inoculated intranasally with a high dose of the 2009 H1N1 influenza virus, the virus replicates in the lungs and leads to significant weight loss and lethality. After a sublethal virus dose the mice develop protective antibodies that protect against severe disease. These observations establish the mouse as a valid model for studying immunization against the 2009 H1N1 strain.

One explanation for why older individuals are protected against infection with the 2009 H1N1 virus is that they were infected years ago with a related virus. To examine this possibility, mice were immunized with different inactivated H1N1 vaccines made from viruses that circulated from 1918â€“2009. Immunization with two different classical swine H1N1 viruses (Sw/30 or NJ/76), 1918 virus-like particles, and a human H1N1 virus isolated in 1943 (Wei/43) protected against death from 2009 pandemic H1N1 challenge. However, only partial protection against challenge was afforded by immunization with seasonal H1N1 viruses that circulated from 1977â€“2007.

These results suggest that the 1918, SW/30, and NJ/76 viruses induce antibodies that cross-react with the 2009 H1N1 strain. This possibility was confirmed by examining mouse sera by hemagglutinin inhibition assay. Sera from animals that were immunized withÂ 1918 virus-like particles, SW/30 or NJ/76 had hemagglutination-inhibition activity (titer â‰¥Â 40) against 2009 H1N1 viruses.

In other words, if you lived before 1943, or received the 1976 swine flu vaccine, you may be protected against infection with 2009 H1N1 virus. After the 1976 swine H1N1 outbreak at Fort Dix, NJ, approximately 40 million people in the United States were immunized with an NJ/76 vaccine. The NJ/76 swine virus never spread in the general population, but the vaccine against it has finally proven useful.

If you are less than 35 years old, you are more likely to be infected with the 2009 H1N1 virus because you did not receive the NJ/76 vaccine, nor were you infected with viruses that circulated from 1918-1943.

Perhaps most interesting is the idea that the H1 hemagglutinin has remained ‘antigenically frozen’ in domestic pigs. In 1918, the H1N1 virus entered humans and pigs at roughly the same time. In humans the H1N1 virus underwent significant antigenic drift; as a consequence H1N1 viruses that circulated after 1943 do not protect against infection with 2009 H1N1. During the same period swine H1N1 virus underwent little antigenic drift in pigs, as shown by the ability of the NJ/76 strain to induce protective immunity in mice against the 2009 H1N1 virus. Why the virus does not evolve rapidly in domestic pigs is unknown, but could be related to the short lives of these food animals – there is little pre-existing immunity in pigs which could apply selective pressure for antigenic drift.

The fact that the H1 HA has remained antigenically stable in pigs since 1918 suggests that this animal could be a source of future pandemic strains. In one scenario, while the H1N1 virus remains in pigs for several generations, population immunity to the H1 HA declines until it is low enough to allow another pandemic outbreak. The human H3 HA has also become established in domestic pigs. With the likely disappearance of the H3N2 seasonal strain from humans this year, population immunity to this HA will wane. Perhaps in 60-70 years a virus with an H3 HA will emerge from domestic pigs as a new pandemic strain.