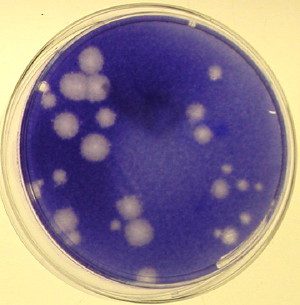 One of the most important procedures in virology is measuring the virus titer â€“ the concentration of viruses in a sample. A widely used approach for determining the quantity of infectious virus is the plaque assay. In this technique, the spread of progeny viruses released by individually infected cells is restricted to neighboring cells by a semisolid medium. Consequently, each infectious particle produces a circular zone of infected cells called a plaque. By imagining live, virus-infected cells using a microscope, beautiful movies have been made which show how a plaque develops in real time.

To produce the movies, cells were infected with vaccinia virus, covered with a semi-solid medium, and placed in an incubator. The monolayers were examined periodically until a small plaque became visible. The infected cells were then placed on an inverted microscope fitted with a camera. Images of the plaque were taken every hour for 12-19 hours and assembled into a movie.

The first movie shows plaque formation on monkey cells infected with vaccinia virus. The virus infection begins at a small focus in the center, then spreads radially outwards. As the infection spreads, the cells undergo changes know as cytopathic effect. The large circle of dead cells would appear as a plaque if the monolayer were stained.

The second movie, made at higher magnification, shows spread at the edge of a viral plaque. The vaccinia virus used for this experiment carries the gene encoding enhanced green fluorescent protein (EGFP). Hence the infected cells fluoresce green as viral replication proceeds.

By showing very clearly how a viral plaque develops, these movies will be an invaluable teaching resource for years to come. I am grateful to the authors of this study for providing an up-close view of a technique that animal virologists have been using since 1952.