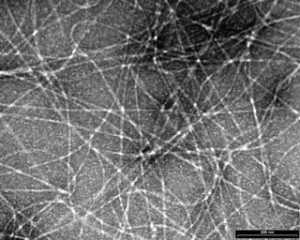 Fragments of an abundant protein produced by the prostate form amyloid fibrils that enhance infection of cells by human immunodeficiency virus type 1. These fibrils, called semen-derived enhancer of virus infection (SEVI), have been found to boost infection of prostate cells by the retrovirus XMRV. Is this evidence that XMRV causes prostate cancer?

Because most HIV-1 infections are a consequence of genital exposure to semen of virus-infected men, seminal fluid was screened for peptides or proteins that enhance viral infectivity. Peptides (34 – 40 amino acids in length) derived from prostatic acidic phosphates, a common protein found in semen, were found to dramatically enhance HIV-1 infection of cultured cells. These peptide fragments form amyloid fibrils which bind both virions and cells, thereby promoting virus attachment and stimulating infectivity. The prostatic amyloid fibrils, called SEVI, are found at high levels in semen, which also stimulates HIV infection. SEVI is believed to play an important role in sexual transmission of HIV. Inhibitors of the stimulatory effect of SEVI on HIV infection, such as surfen, may have therapeutic value.

Xenotropic murine leukemia virus-related virus (XMRV) has been detected in prostate cancer tissues and is therefore a candidate tumor virus. XMRV, which has also been implicated in chronic fatigue syndrome, was first isolated from prostate tissue. Therefore it made perfect sense to determine whether SEVI, which originates from the prostate gland, enhances XMRV infection.

The observation that SEVI enhances XMRV infection is consistent with the possibility that the virus is sexually transmitted. Men with a history of prostatitis or sexually transmitted infections appear to have a higher risk of acquiring prostate cancer. However, the effect of a prostate-derived peptide on XMRV infection might be coincidental: the amyloid fibrils could stimulate infection by other viruses, as noted by the virologists who discovered SEVI:

…the capability to promote the interaction between virions and the cell surface is independent of the viral Env glycoprotein and hence not restrictedÂ to retroviruses. Thus, further studies on the role of amyloids in the transmission and pathogenesis of envelopedÂ viruses are highly warranted.

About 30 human diseases, including Alzheimer’s, are associated with deposits of amyloid. Bacterial and fungal infections can also lead to formation of amyloid fibrils – which could explain why sexually transmitted diseases increase the likelihood of acquiring prostate cancer. The ability of these fibrils to enhance infection with different viruses should be examined. It’s possible that different amyloid fibrils are a new general risk factor for certain viral infections.