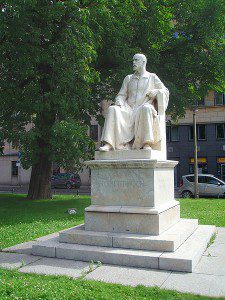 For thousands of years, epidemics of contagious diseases were believed to be caused by the wrath of the gods, configuration of stars, or miasma. The association of specific microorganisms with disease came about as a consequence of the work of the German physician Robert Koch. He formulated a set of criteria that could be used to identify the pathogen responsible for a specific disease. These criteria came to be known as Koch’s postulates:

Koch applied these criteria to show that anthrax, a common disease of cattle, was caused by the bacterium Bacillus anthracis, and that tuberculosis in humans was caused by a different bacterial species. His postulates provided a framework for proving the role of microbes in disease. As a consequence of his work, the study of infectious disease was placed on a secure scientific foundation, which ultimately made possible rational treatment and control.

Despite the importance of Koch’s postulates in the development of microbiology, they have severe limitations, which even Koch realized. For example, he believed that cholera and leprosy were caused by microbes, but could not fulfill all four postulates. Furthermore, Koch knew that the putative agent of cholera, Vibrio cholerae, could be isolated from both sick and healthy people, invalidating postulate #2.

The limitations of Koch’s criteria are even more obvious when we consider viral diseases, which were not yet discovered when the postulates were formulated. Thomas Rivers, who has been called the ‘father of modern virology’, wrote:

â€˜â€˜It is unfortunate that so many workers blindly followed the rules, because Koch himself quickly realized that in certain instances all the conditions could not be met. . . . Thus, in regard to certain diseases, particularly those caused by viruses, the blind adherence to Kochâ€™s postulates may act as a hindrance instead of an aid.â€™â€™

Many viruses do not cause illness in all infected individuals, a requirement of postulate #1. An example is poliovirus, which causes paralytic disease in about 1% of those infected. Further compromising postulate #1 is the fact that infection with the same virus may lead to markedly different diseases, while different viruses may cause the same disease.Â Postulates #2 and #3 cannot be fulfilled for viruses that do not replicate in cell culture, or for which a suitable animal model has not been identified.

The application of nucleic acid-based methods of microbial identification has made Koch’s postulates even less applicable. Polymerase chain reaction and high-throughput sequence analysis have revealed a great deal about microbes that are associated with pathology or disease, but proving causation has become even more difficult as the number of uncultivable viruses rapidly multiplies. Nucleic acid based detection methods are so sensitive that they detect small numbers of viruses that may occur in the absence of disease. The use of these new methods have lead to revised versions of Koch’s postulates that are fundamentally sound: both hepatitis C virus and human papillomaviruses were convincingly shown to be causative agents of hepatitis and cervical cancer, respectively, long before methods were developed for propagation of the viruses in cell culture.

Here are Koch’s postulates for the 21st century as suggested by Fredricks and Relman: