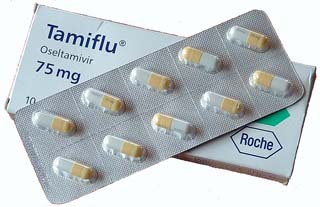 In the wake of a British Medical Journal article which concludes that Tamiflu has at best a modest effect, many readers have asked if influenza neuraminidase inhibitors function at all. If you’d like a good critique of this study, I suggest reading Paul Revere’s analysis at Effect Measure. For our part, we’ll examine some of the virological evidence for the effectiveness of Tamiflu.

One of the first human studies on the effectiveness of Tamiflu was published about ten years ago. The human subjects (117 healthy adult volunteers, 18-40 years of age, with hemagglutination-inhibition antibody titers 1:8 or lower) were infected intranasally with a seasonal H1N1 strain of influenza virus. Some subjects were given Tamiflu or placebo 26 hours before infection, while others were given the treatment 28 hours after inoculation. Frequency of infection, viral shedding in nasal washes, and clinical symptoms (such as temperature, nasal stuffiness, runny nose, sore throat, sneezing, cough, breathing difficulty, muscle aches, fatigue, headache, earache/pressure, feverishness, hoarseness, chest discomfort, overall discomfort)Â were then determined.

When Tamiflu was given before infection (prophylaxis), 8 of 21 individuals became infected (38%), while 8 of 12 individuals given placebo were infected (67%). None of the patients given Tamiflu shed virus in nasal secretions, or reported respiratory illness. Virus was shed by 50% of individuals in the placebo group, and a third had clinical symptoms of infection.

The authors concluded that “In these trials, prophylaxis and early treatment with oral oseltamivir were both associated with significant antiviral and clinical effects in experimental human influenza.” In other words, if you know you have influenza, Tamiflu works reasonably well.

The results of these studies justified the larger scale clinical trials which were subsequently done to provide the data needed for approval of Tamiflu in humans.