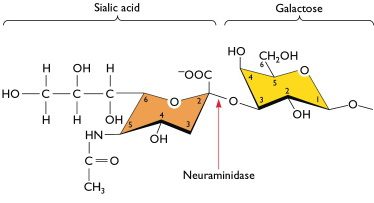 The Norwegian Institute of Public Health recently identified a mutation in 2009 H1N1 influenza virus isolated from two patients who died and one with severe disease. It has been suggested that this mutation, which causes a change from the amino acid aspartic acid to glycine at position 225 of the viral HA protein (D225G), could make the virus more likely to infect deeper in the airways and cause more severe disease. What is the basis for this concern and does it have merit?

The type of sialic acid preferred by influenza viruses is controlled by amino acids in the HA protein. Amino acids 190 and 225 are important determinants of receptor binding specificity of the 1918 H1 hemagglutinin. The HA of the 1918 strain A/South Carolina/1/18 prefers alpha(2,3) linked sialic acids; the New York variant, isolated in September 1918, binds both alpha(2,3) and alpha(2,6) sialic acids. These two H1 hemagglutinins differ only by a single amino acid, position 225, which is aspartic acid (D) in the South Carolina strain and glycine (G) in the NY strain. When amino acid 190, which is D in both strains, is changed to E in the NY HA, the virus (AV18) preferentially binds alpha(2,3) sialic acids. These findings are summarized in the table.

In the human respiratory tract, alpha(2,6) linked sialic acids are dominant on epithelial cells in the nasal mucosa, paranasal sinuses, pharynx, trachea, and bronchi. Alpha(2,3) linked sialic acids are found on nonciliated bronchiolar cells at the junction between the respiratory bronchiole and alveolus, and on type II cells lining the alveolar wall.

An important consideration is that the D225G amino acid change has a negative impact on transmission. The change from D to G at amino acid 225 of the 1918 HA significantly impairs transmission among ferrets. When both D225G and D190E are present, transmission is abolished. These changes do not impair viral replication or virulence in the respiratory tract of inoculated animals.

Transmissibility is clearly a positive selection factor for viral evolution. There may be selection for increased virulence only if there is no negative impact on viral transmission. Given these considerations, the choice between an H1 HA amino acid at position 225 that allows efficient transmission (D225) or one that impairs transmission and might or might not allow multiplication deeper in the lung (D225G) seems obvious.