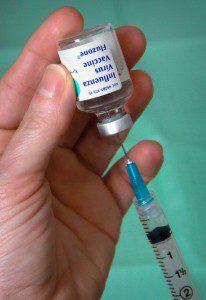 Although the influenza 2009 H1N1 vaccine produced by Novartis, Fluvirin, was previously approved for use in the US, the clinical data supporting its safety and immunogenicity had not been released. The company has now issued a media release containing interim clinical data on the effects of the vaccine in humans.

According to the company, testing of the vaccine in 4,080 adult and elderly (>65 years) US individuals has revealed that a half dose (3.75 micrograms) without adjuvant “fulfilled immune response criteria associated with protection”. I assume that the latter statement means that hemagglutination inhibition titers of 1:40 or greater were observed, but this is not explicitly stated.Â  Current US guidelines for the 2009 H1N1 2009 vaccine stipulate that adolescents, adults and the elderly should receive one 15 microgram dose, and children 9 years of age and under are required to receive two 15 microgram doses four weeks apart.

Fluvirin with MF59 adjuvant was also tested in children ages 3 to 8, adults ages 18 to 64, and the elderly. The results indicate that a single 3.75 microgram dose of vaccine with adjuvant induced protective levels of immunity. The media release includes the following:

Novartis proprietary MF59 adjuvant has an established safety profile, supported by more than 12 years of clinical safety data and more than 45 million doses of commercial use in Europe. The adjuvant has been studied in clinical trials involving more than 33,000 people, including children, and has been licensed for use in people 65 years of age and over in the seasonal influenza vaccine FluadÂ® since 1997 in the European Union. Novartis also produces two A(H1N1) vaccines, FocetriaÂ® and CelturaÂ®, which contain MF59 and are available outside the US.

MF59 adjuvant contains squalene, polyoxyethylene sorbitan monooleate (Tween 80) and sorbitan trioleate. No vaccine containing this adjuvant has been approved for use in the US.

A media release is no substitute for revealing clinical trial results in a peer-reviewed scientific journal. Novartis indicates that the vaccine trial will be completed in December 2009, and the results should be published shortly thereafter. It’s important for vaccine manufacturers to make clinical trial data freely available to address the concerns of those who are worried about vaccine safety.