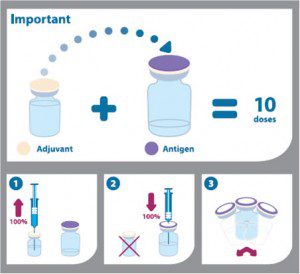 The influenza A (H1N1) 2009 vaccine produced by GlaxoSmithKline has been approved by Canada Health. Here is some information on the vaccine to supplement what I’ve provided about the US counterparts.

The Canadian vaccine, called Arepanrix H1N1, is supplied in two parts. One contains inactivated H1N1 influenza virus, and the second consists of AS03 adjuvant (DL-a-tocopherol, squalene, polysorbate 80). Before injection the virus and adjuvant are mixed. The vaccine is provided in 10-dose vials and therefore contains thimerosal. More information on the amounts of these components can be found at the Canada Health website (“Product Information Leaflet Arepanrix™ H1N1 AS03-Adjuvanted H1N1 Pandemic Influenza Vaccine”).

Health Canada approved the vaccine based on limited clinical testing, under the provision of an interim order. It is expected that additional safety data will be provided at a later date. The interim order that allows use of Arepanrix H1N1 is based on safety and immunogenicity data on an H5N1 vaccine prepared with AS03 adjuvant in adults and in children, and on 2 separate studies of an H1N1 vaccine prepared with AS03 adjuvant in adults. Canada Health assumes that Arepanrix H1N1 with adjuvant will behave similarly in children and adults as these two tested vaccines, and hence issued the interim order of approval. Let’s examine some of this information.

Adverse reactions: Two studies on H1N1 vaccine were conducted in adults 18-60 years of age. Adverse effects reported included inoculation site pain, redness, swelling, fatigue, headache, arthralgia, myalgia, shivering, and sweating. In general the reactions were reported more frequently in those receiving vaccine with adjuvant. For example, inoculation site pain was reported in 88.9% of 63 individuals who received vaccine with adjuvant, and in 59.1% of 66 who received vaccine without adjuvant. Similar observations were obtained in the second study with 124 individuals.

More extensive studies compared adverse effects of inoculating H5N1 vaccine plus adjuvant in 3,500 adults; the control group was inoculated with buffer. A similar range of symptoms was reported, the most common pain (73%) and muscle aches (33%). Incidence was less in those who received placebo (pain 12%; muscle aches 11.8%). In a separate study, ~300 children 3-5 and 6-9 years of age were given a full or half dose of H5N1 vaccine plus adjuvant. Pain, redness, swelling, fever, drowsiness, irritability, loss of appetite and shivering were more common in those who received the full dose of vaccine. No serious adverse effects caused by the vaccine were recorded.

Immunogenicity: In two separate studies in adults, the H1N1 vaccine lead to seroconversion of 97 and 98.4% of test subjects with or without adjuvant (conversion defined as an HI titer greater than or equal to 1:40). No immunogenicity studies of the H1N1 vaccine in children have been reported. There have been studies in children inoculated with an H5N1 vaccine, but I won’t consider those because the clinical experience is quite different from H1N1 vaccines. The full report can be found here.

Summary: In adults, the H1N1 vaccine approved in Canada induces protective immune responses. The immunogenicity of the H1N1 vaccine in children remains to be determined. In both adults and children, the use of adjuvant leads to more frequent adverse reactions but these are not serious. Consequently Canada Health recommends that children 3-9 years old should be given two half doses of vaccine three weeks apart, and children 10-17 years should receive the full dose (0.5 mL).

Canada has purchased 1.8 million doses of inactivated H1N1 vaccine without adjuvant, but those will not be available until November.

Next post: XMRV not detected in German prostate cancer