Zinc and the common cold 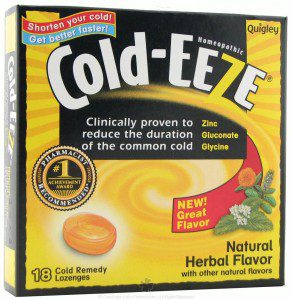 Shortly after I developed sore throat, cough, and congestion last week, a package of ‘Cold – Eeze’ materialized on my kitchen counter. The writing on the package of zinc-laden lozenges promised to ‘shorten your cold’, and noted that they were ‘clinically proven to reduce the duration of the common cold’. Do zinc lozenges have any effect on the common cold?

The common cold is the primary cause of doctor visits in the United States, leading to 189 million lost school days each year. But it’s important to point out that the common cold can be caused by a number of different viruses, including rhinovirus, coronavirus, influenza virus, adenovirus, and paramyxovirus. Rhinoviruses are responsible for over half of all common colds.

The idea that zinc could be used to treat the common cold originated from a 1974 paper in Nature which showed that zinc blocks the replication of rhinoviruses in cell culture. Viral plaque formation was inhibited over 99% when 0.1 millimolar zinc chloride was included in the agar overlay. However, this concentration of zinc is too high for therapeutic use, and subsequent studies showed that levels compatible with use of the metal ion in humans minimally inhibited rhinovirus replication in cell culture. Zinc does not readily pass through the cell membrane, explaining why high concentrations are required to produce an antiviral effect.

Many trials have been conducted to determine if zinc – taken as a lozenge, nasal spray, or ointment – has any effect on the common cold in humans. In one study, 200 children were given 15 mg zinc daily by mouth for seven months. The mean number of colds in the treated children was 1.2 compared with 1.7 in the untreated children – statistically significant but not therapeutically useful. Many studies have evaluated the effectiveness of zinc containing lozenges. In one, 65 people took one lozenge containing 23 mg zinc every two hours while awake. After one week, 86% of the treated group were free of cold symptoms, compared with 46% of the placebo group. In another similar study, the duration of cold symptoms was reduced in the zinc group versus the placebo group – 4.5 days compared with 8.1 days. However, as many studies have lead to the conclusion that zinc lozenges – as well as zinc administered intransally or in a gel – have no effect on severity or duration of the common cold. A good summary of many of these trials can be found in the Alternative Medicine Review cited below.

It’s important to note that in these studies the virus responsible for the colds is not identified. Given the prevalence of rhinoviruses it is appropriate to assume that these viruses are involved in over half of the colds observed. Nevertheless, the extreme variability in the trial results may in part reflect the fact that various etiologic agents are involved, some of which might not be susceptible to inhibition by zinc. Other possible explanations for the inconsistent results include differences in the zinc preparations used (zinc gluconate and zinc acetate), the quantity of zinc administered, and the composition of the lozenge.

Although inhibition of rhinovirus replication by zinc was reported in 1974, the mechanism is not understood. It is believed that zinc enters the cell and binds to the rhinovirus protein that will form the capsid. This interaction blocks cleavage of the protein, thereby inhibiting production of infectious virus. Consistent with this proposed mechanism is the observation that zinc ionophores – compounds that allow the uptake of zinc into cells – have recently been shown to inhibit rhinovirus replication. The effectiveness of such compounds, which include pyrithione and hinokitiol, for treating the common cold is currently being investigated.

Although zinc does inhibit rhinovirus replication, this activity might not account for the effect on the common cold. It has been suggested that zinc reduces inflammation in the respiratory tract, which would explain the observed decrease in symptoms observed in some trials.

As for the Cold-eeze on my kitchen counter – the package was never opened. The unimpressive results of clinical trials made the idea of taking 6-8 lozenges a day for several days less appealing than enduring sore throat, cough, and congestion for less than a week. But the lozenges served a different purpose – I am now very interested in the revealing the mechanism of zinc inhibition of rhinovirus replication. I have begun experiments in my lab to solve this problem, and I’ll write about what I discover.