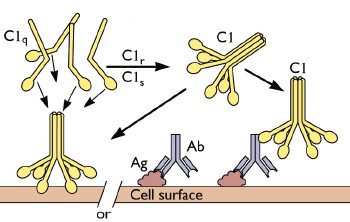 TheÂ classical complement pathway begins when the initiator protein C1q binds directly to the surface of a pathogen, or to an antibody that is bound to a microbe.

There is a binding site for C1q on theÂ Fc portion of antibody molecules.Â C1q can also recognize molecular patterns characteristic of pathogens, much like the Toll-like receptors.

C1q binding to antibody or a pathogen surface initiates an unusual protease cascade with one or more members of a set of seven activating enzymes. This set of cleavages, which occurs on the surface of the microbe, leads to the formation of the membrane attack complex that produces holes in membranes of cells and viruses. Other products of the cascade include mediators of inflammation, which recruit white blood cells to the site of infection. Still more cascade components remain on the surface of the microbe and lead to phagocytosis.

The alternative complement pathway has a distinctive mode of initiation: the abundant C3 protein in plasma is spontaneously hydrolyzed to C3b. The latter protein binds to any membrane surface. Complement regulatory proteins in the membranes of normal cells block further action. When C3b binds to the membrane of a pathogen, there are no complement regulatory proteins present, and therefore the cascade continues and amplifies. Ultimately the membrane attack complex, and mediators of inflammation and opsonization are formed as in the classical pathway.

TheÂ mannan-binding pathway is initiated by the mannose-binding collectins that bind to complex carbohydrate residues on the surface of pathogens. Collectins are sugar binding proteins (lectins) that contain collagen and require calcium for binding. When mannose-binding lectins bind to the microbial surface, a protease cascades is initiated that leads to formation of the membrane attack complex orÂ opsonization.

C1q and the collectins are an important and often overlooked component of the first line of defense against pathogens. These proteins can bind to microbes, leading to lysis or phagocytosis, long before the adaptive immune response is activated.

The animal sera used to supplement cell culture media is usually heated for 55Â°C for 30 minutes before its use in the propagation of enveloped viruses. The purpose of this step is to inactivate the complement proteins which might bind and lyse virions. I don’t bother with heat inactivation as the viruses I work with lack envelopes.

P.S. Wouldn’t C1q and the collectins be a terrific name for a rock band?