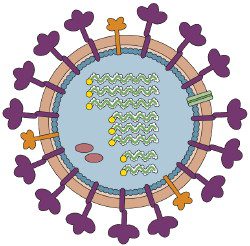 Influenza A viruses tend to garner most of the attention, but let’s not forget that there are two other virus types, B and C.

The enveloped influenza A virions have three membrane proteins (HA, NA, M2), a matrix protein (M1) just below the lipid bilayer, a ribonucleoprotein core (consisting of 8 viral RNA segments and three proteins: PA, PB1, PB2), and the NEP/NS2 protein. It would be difficult to distinguish influenza A and B viruses by electron microscopy, but there are differences. Influenza B virions have four proteins in the envelope: HA, NA, NB, and BM2. Like the M2 protein of influenza A virus, the BM2 protein is a proton channel that is essential for the uncoating process. The NB protein is believed to be an ion channel, but it is not required for viral replication in cell culture.

Influenza B viruses cause the same spectrum of disease as influenza A. However, influenza B viruses do not cause pandemics. This property may be a consequence of the limited host range of the virus – humans and seals – which limits the generation of new strains by reassortment. The virus causes significant morbidity: in the US in 2008, approximately one-third of all laboratory confirmed cases of influenza were caused by influenza B (as shown on the first graph on this CDC page). Consequently the seasonal trivalent influenza vaccine contains an influenza B virus component.