There has been a great deal of discussion about the use of adjuvants to improve the immunogenicity of vaccines against the 2009 H1N1 pandemic influenza strain. What effect do these compounds have on the immune response?

Adjuvants are compounds added to vaccines that stimulate the immune response. They are often used when the antigen is in short supply, or does not induce a good antibody response. Because the 2009 H1N1 pandemic influenza strains do not replicate well in eggs, it has been suggested that adjuvants be used to ensure that there is sufficient supply of vaccine.

A recent study demonstrates very clearly the effect of adjuvants on the immune response. Mice were immunized with egg-produced 2009 H1N1 influenza vaccine with or without the adjuvant MF59. A boost inoculation was given on day 21. Sera were taken on days 13 and 21 and the antibody response was measured by hemagglutination-inhibition (HI) assay. If you don’t know how an HI assay works, please read my previous description. The results of the assay are shown in the figure. 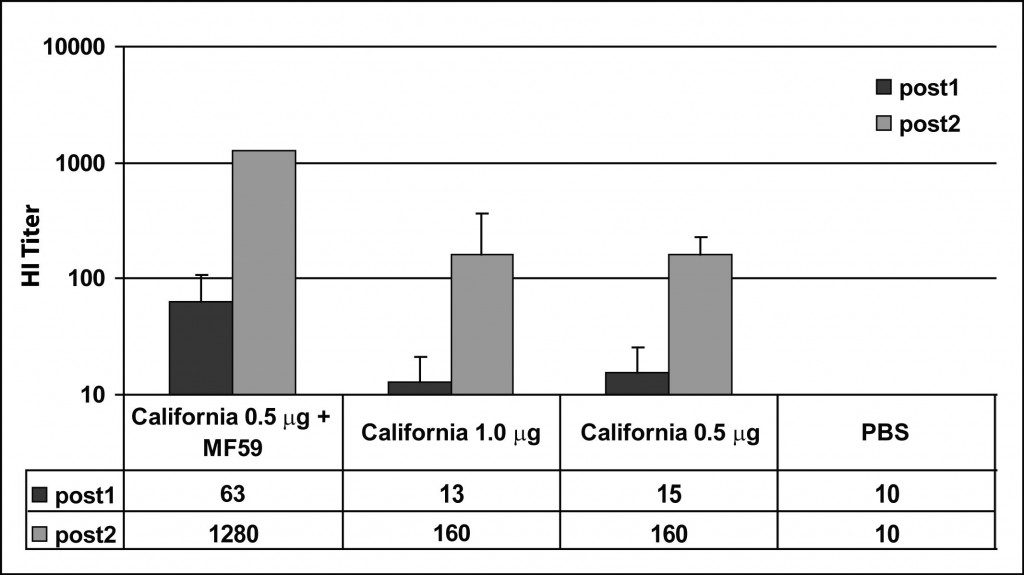 One week after immunization with 0.5 micrograms of antigen, the average serum HI titer was 1:15 (bars labeled post1). This titer is barely higher than obtained when mice were immunized with buffer alone (PBS). The HI titer rose to 1:160 after the boost. When MF59 adjuvant was included, the first and second HI titers were significantly higher – 1:63 and 1:1280.

What do thes numbers mean? Protection of humans against seasonal influenza is generally believed to require a HI titer of 1:40 or more. Therefore when MF59 adjuvant is used in mice, one immunization is sufficient to confer protection against disease. Without adjuvant, two doses are required for protection.

Trials are ongoing in adults to determine the immunogenicity of 2009 H1N1 vaccines with and without adjuvant.

I know that many readers are concerned about the possible side effects of adjuvants. MF59 has been used for 12 years in seasonal influenza vaccines in Europe and is considered a safe adjuvant. However, the Centers for Disease Control and Prevention believes that the 2009 H1N1 vaccine will likely not be used with adjuvant.